As a debut, Whitney Houston's 1985 album isn't as good as I expected. My biggest issue is it felt dated by about four to five years. 80's material, but more so in line with that of what we were hearing when 70's artists were making the transition into the new decade.

The clue in to what the problem was when I heard not one, but two tracks which featured Jermaine Jackson singing duets with Houston. This caused me to dig into the album credits, and that's where I found what was wrong, and how this all happened. That was, the album was produced by Jermaine Jackson. 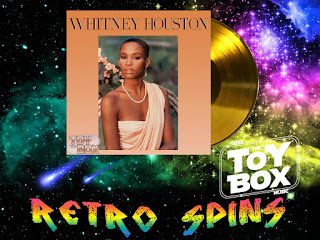 Huh? Produced by Jermaine Jackson, how is that a problem?

Well, let me summarize. To me, Jermaine Jackson's solo albums have always had the same problem. They always felt three to five years behind the times. Smooth R&B in an era when pop rock was big, big, big. His brother Michael figured this out when he made the transition to the 70's sounds of Off the Wall to his pop opus, Thriller. Yet somehow, Jermaine never seemed to catch on to the evolution of music throughout the decade, staying lost in the past.

This transitions big time into Houston's debut album, and only becomes more noticeable in the finale track, Hold Me, featuring Teddy Pendergrass. With its ballad style and orchestrated background, you can't help but feel you've stepped out of 1985.

Mind you, it's not that it's a bad album. It just catches you off guard. At least it did for me. Still, there are good tracks, classic Houston ones at that, to be found here; You Give Good Love, Saving All My Love For You, How Will I Know and Greatest Love Of All. Out of those four, How Will I Know is definitely the best.

If anything, Whitney Houston, the album, sets the stage which would become the singer's powerhouse follow up, Whitney (1987) - Apparently she wasn't very creative with her album titles - and future things to come.

Click "HERE" to go back to the home page. For more posts related to this one, please click the labels below.
Posted by The Toy Box on April 06, 2021
Email ThisBlogThis!Share to TwitterShare to FacebookShare to Pinterest
Labels: 1985, 80's Album Review, 80's Music, 80's Music Review, Music of the 80's, Retro Spins, Whitney Houston