Retro Spins: Prince - For You

Prince has for a long time now been one of my favorite artists. His Purple Rain, Batman and 1999 albums will always rank among what I would call perfect. For me, Prince started to really shine right around 1980 with his Dirty Mind album, and continued to deliver non-stop through his 1990 Graffiti Bridge soundtrack. While his two follow ups, Diamonds And Pearls and O(+> (aka The Love Symbol Album) began his faltering and inevitable decline from popular mainstream.

It's because of this that I don't necessarily give his two albums from the 70's, and much beyond 1992 all that much attention. I mean, I have all of his albums, but there are definitely a lot of failures towards the end of his career.

Despite this, I thought I would go back in time to his debut album, For You, and give it a follow up listen to. Though I've heard it a few times, because I more so stick to his 80's albums, I don't tend to remember this record all that well. 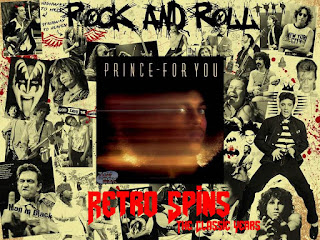 What's very obvious from the moment it starts up is that Prince had a talent for crafting music. The multi-layer intro, aptly titled For You, sets a high bar, despite its overall simple composition. However, to really dig deep into the genius behind the album, one has to acknowledge the liner notes on the back which state, "Produced, Arranged, Composed and Performed by Prince." The man literally did everything himself on this (and most of his future albums). I dare say had they let him, he would have pressed and distributed his own records as well.

There's not denying that Prince was a talented artist. However, where this album falters is that it doesn't necessarily showcase him at his best. He may have been giving his all, but this wasn't the sound that would ultimately become the Purple One.

Another aspect I'm not necessarily into with For You is that he sings the majority of his songs in a falsetto key. Can Prince sing high? Yes. However, that's not really for me. I much prefer his tenor vocals.

Overall, it's a decent album, but it's far from my favorite. It's worth adding to your collection if you're an avid Prince fan, but if you're much more into his hits, you won't find those here. As much as I like Prince, there's only two songs from For You that make the cut for my shuffle list. Those are Just As Long As We're Together and I'm Yours. As for the rest, they can pretty much be skipped.

Disclaimer: They Toy Box does not endorse or contribute to piracy. Retro Spins posts are intended for educational and entertainment purposes only. None of the music discussed here is available for sale, downloading or distribution.
Posted by The Toy Box on April 21, 2021
Email ThisBlogThis!Share to TwitterShare to FacebookShare to Pinterest
Labels: 1978, 70's Album Review, 70's Music, 70's Music Review, For You, Music of the 70's, Prince, Retro Spins