As I walked the cereal isles hoping to find that wonderful word on a box, you know, "NEW", I was only able to find Honey Lucky Charms. That was a hard pass for me. I didn't hate the idea of the flavor of the cereal, I'm just not a fan of Lucky Charms in general.

Thinking I must have missed something, I looked again, only to have to admit defeat that it wasn't the 80's anymore, and branded "special edition" cereals really aren't a thing these days. Fortunately, I already had a box of cereal at home which I had yet to pop open, so despite my mild disappointment, I knew I at least had something to look forward to. 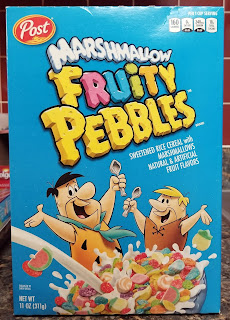 Marshmallow Fruity Pebbles have been in existence since 2015, yet for as much as I love me some of the original and Cocoa varieties, I had never tried this particular version. Well, as I'm sure you could tell from the post title and picture, that all changed as of today.

Flipping the box over, I saw a fun game which hearkened me back to my days of reading Highlights Magazine. 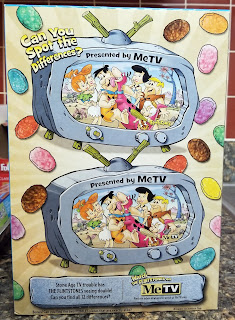 Anybody else remember those back covers of the magazine with the "find the differences" game? I actually took a moment to find all twelve differences, as well as the bonus of finding the two Fruity Pebbles that were the same. Dig it! 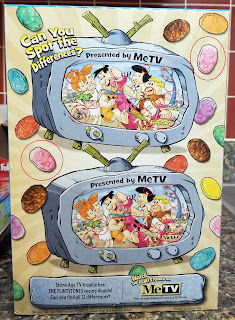 Now, I have eaten my fair share of Fruity Pebbles in my day. In fact, one of my favorite things to do is combine it half and half with Cocoa ones. So with that in mind, I really didn't expect to find anything new here, with exception of the marshmallow bits. 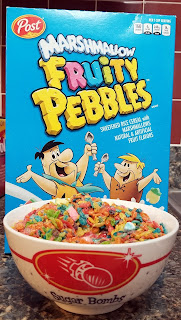 The cereal is as advertised. You're not going to get something you weren't expecting here. The traditional taste of the base cereal is there, and so is that chalky, crunchy marshmallow that has accompanied many a cereal variety. 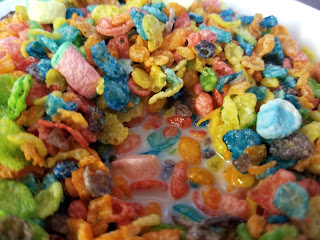 Did I like it? Well, yeah. I mean, I already said I like Fruity Pebbles. With that said, the marshmallows also aren't necessarily a necessity. Will I buy this box again? Maybe. But in all likelihood, I'd probably just pick up a regular red box sans marshmallows. They don't really add anything to the cereal to get excited about.
***UPDATE***
So apparently eating Marshmallow Fruity Pebbles for dinner, and then going to be an hour later results in a whole slew of weird nightmarish type dreams. If that's your idea of a good night, then I highly recommend you get you some of this cereal. However, if like me, it results in a very unrestful night, you may want to pass.

Posted by The Toy Box on April 27, 2021
Email ThisBlogThis!Share to TwitterShare to FacebookShare to Pinterest
Labels: Cereal