So with that figure being a wash, and an absolute missed opportunity for Hasbro to pack in individually "carded" Barnoess figures, let's jump into the positives. That being these two all new figures. Hasbro delivers big time, and wave four serves to only excite me for a line I keep teetering on the edge of a love hate relationship. 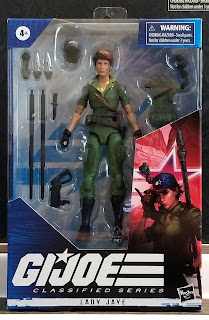 Right off the bat, you can see that Lady Jaye come packed to the hilt with accessories. We'll dig into those in a moment, but first let's take a tour around the box. 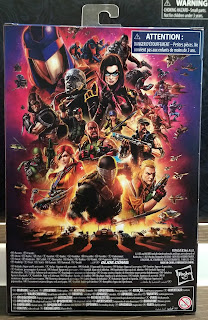 Flipping over the package, I immediately noticed that there's been an update from the recent Zartan / Cobra Infantry wave. Not only have Lady Jaye and Flint been incorporated into the artwork, so too has Major Bludd. While I wish I could say this means the figure is on the horizon, the Alley Viper has been on the package since day one, and to date has not been announced. I'm hopeful, but we'll see.

The one side of the box has some great artwork of Lady Jaye, while the other side has the usual array of symbols denoting the character's role, gear, skill and mastery. Would you believe I started this post at 4:39 PM, and then deviated until 7:00 PM to mess around with the Classified site to copy and paste all the symbols and descriptions into my own document? On the bright side, I now have a quick reference to all of them should the site ever go away. The bad news is I lost an hour and a half of time to it. 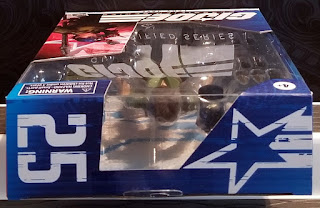 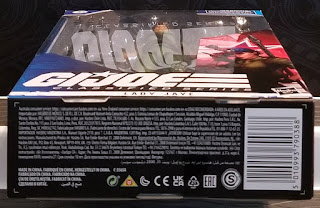 Taking Lady Jaye out of the package I got this immediate feeling like she was fragile. There's not a lot of girth to her, and that's not a bad thing. 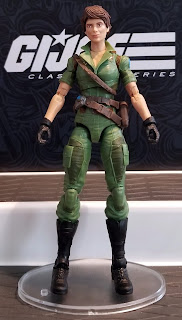 Spinning the figure around for my first glance, I was in awe. It's a fabulous iteration of the original Sunbow cartoon character. Far superior to that of the original 1985 3 3/4 figure. There are just enough details to bring it in line with the Classified vibe, while staying true to the original animated design. 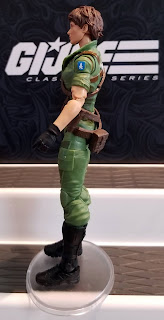 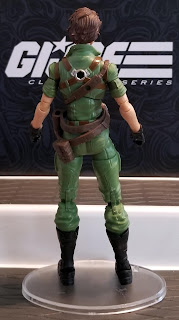 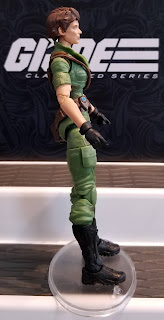 There are a ton of accessories packed in with this figure, and they're all pretty awesome. 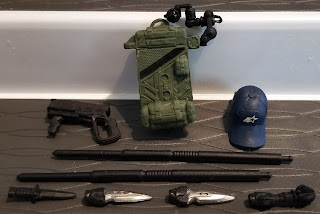 You get two javelin poles, and for them, three heads, two of which are blades and the last which looks to be a special modification, such as a net launcher or explosive. There's also a knife which fits snug in the sheath on the belt, a hat, which I'll go into a bit further down, a firearm and pack.

The firearm isn't meant to be a stand alone weapon. Instead, it has a hole running through it for you to put the javelin's in. If you flicked it from behind hard enough, you could probably launch it. However, for me, I think the weapon looks good enough to stand on its own. Kind of like a futuristic sawed off shotgun.

Flipping the pack around, it reveals two slots which conveniently hold two of the three javelin tips. In addition to this storage capability, the side of the pack has a slot for putting one of the poles on. Lastly, there's a fairly articulated camera which can flip and rotate in numerous locations. By far, this is the best pack to date in the line. 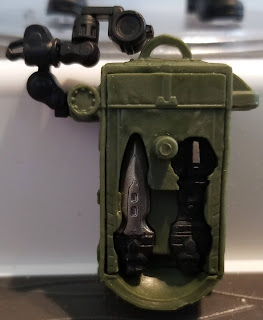 Alright, so let's talk about that hat. While it is indeed supposed to fit on the figure's head, you actually don't just pop it on top and call it a day. Instead, you have to remove Lady Jaye's hair first. 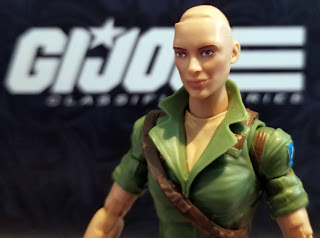 Yes, the hair is removable, and she looks weird without it. 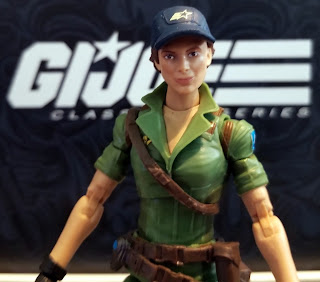 The hat is fortunately sculpted with hair jutting out the back of it, so the character doesn't stay bald when on. While I appreciate the homage to the original figure, which was sculpted with a baseball cap on, I do prefer it sans hat.

All decked out, Lady Jaye is 100% pure awesome. At first, I wasn't sold on the face, but as I continued to write this post, it grew on me. Overall, I'm incredibly happy with this one. More of this, please Hasbro. 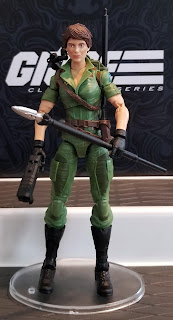 Though it may seem odd to include in this post, I did find it interesting that the peg holes in the feet were located at the front of the boots, versus the back like it is on all the other figures. I honestly feel like this stabilizes it more, making it easier to stand.

Moving on to Flint, you get the same box style, of course with different art and other such details specific to the character. 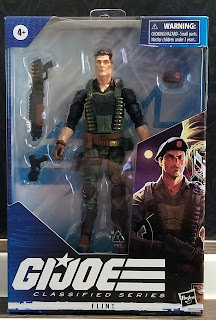 It's somewhat unfair for Flint to follow up Lady Jaye because it's immediately noticed that the accessories are sparse and limited. Not only that, but isn't that Duke's pistol? Yes, it sure is. To be exact, an unpainted one as seen in the repainted / repacked Duke. 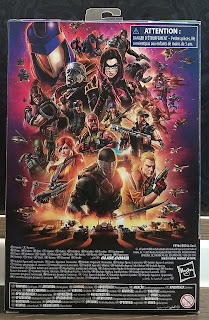 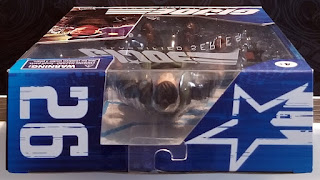 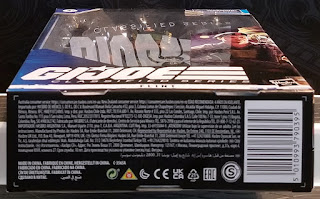 Popping the figure out of the box, and gave it a 360 once over, I noticed another thing which quickly became an issue for me. Not only was the pistol packed in Duke's, but the figure itself is too. The only thing sculpted for Flint is the face, vest, belt and shin guards. Other than that, the remainder of the body is that of Duke from wave one.
p 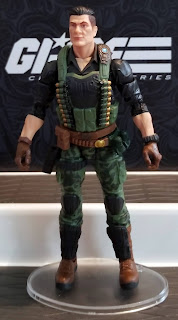 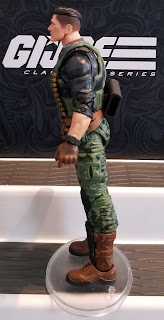 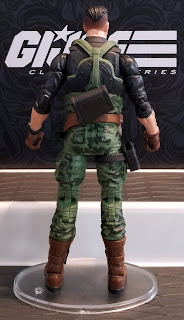 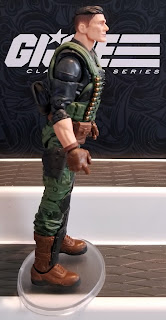 Despite this figure borrowing liberally from Duke, I can't say as it deters me from my enjoyment of it. The overall design is fantastic, and a fantastic upgrade to that of the original 1985 version. Though I never had one as a kid, Flint was a figure I really wanted when I started collecting the vintage line as an adult. He was always one of my favorite characters from the cartoon.

Accessories wise, while limited, hits all the right notes. The shotgun and beret compliment the figure perfectly. While not really a necessary accessory, since the pistol has the ability to be stored in the leg holster, it's not objectionable. Yes, it is the same as Dukes, but let's be honest, not every gun has to be unique. In fact, having similar ones helps establish that the weapons are actually manufactured / mass produced by arms dealers, versus being custom made for each character.

A unique aspect to the shotgun is a hinged joint which allows it to be split open as a reloading play feature. I suppose it's cool. It would be cooler if it had mini shells that could be inserted into the gun. The ones on the side do not come off. 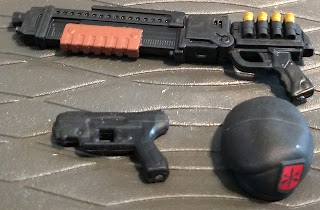 All decked out, Flint has presence. He's definitely going to stand out on my shelf of Classified toys. While I'm not a fan of putting hats or masks on my toys, because it promotes paint wear and chipping, it just isn't Flint without it. This figure is so awesome!

Every time I think about dropping out of the G.I. Joe Classified line they go an do something like this...And totally redeem themselves!