In one of those rare moments, I work up really early this morning, and not only that, was really hungry. Perfect! This is the opportunity I needed to pop down to the kitchen and try a brand new cereal! 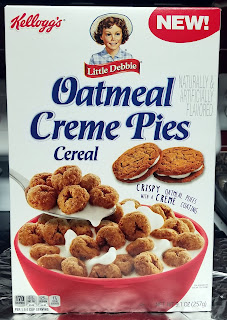 Oatmeal cookies, and to an extent, Little Debbie's brand of Creme Pies, isn't my favorite cookie of all time. But, in the grand scheme of things they're not terrible. But what really drew me to the box as I perused the cereal isles were those three little letters at the top right of the box. N-E-W! This was exactly what I was hoping to find. Something new. 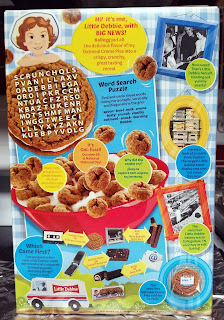 The back of the box is jam packed with facts on the brand, and a fun little word search provides a momentary bit of fun. I mean, I assume it does. Being three in the morning, I didn't personally do this. 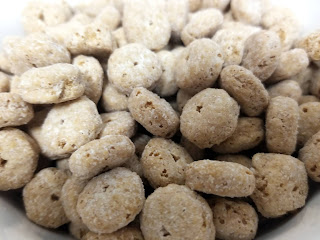 Cracking the box and bag open, a waft of cinnamon fills the immediate surrounding space. It smells almost like a cinnamon role. Now I will be honest, cinnamon isn't my spice of choice. I suppose it's okay in moderation, but it can certainly be overkill if the slightest bit of too much is added to anything. 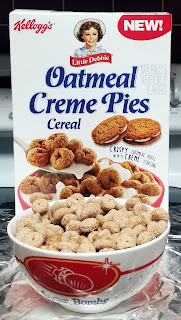 As I picked a piece of the cereal up, I immediately noticed that it felt "dusty". I'm not sure what Kellogg's used to adhere the cinnamon to it, but it's not sugar. It's just some form of flavorless powder. The box claims this is "Creme Flavor", but it certainly doesn't add anything to the cereal.

Comparing it to the box, you can see there's a major discrepancy going on here. The pieces shown on the box are a rich brown, looking coated with cinnamon and sugar. However, the cereal itself is pale, almost sickly looking.

As a whole it's relatively flavorless. It tastes like a plain Cheetos with a hint of cinnamon. Worst of all, it has an awful after taste. Even as I type this, it lingers in the back of my throat. It reminds me of the Mandalorian Cereal I ate on Christmas morning. If I had to say something positive about it, the cereal didn't lose any of its crunch throughout the entire bowl. However, I don't think I'm going to make it through this box. It's not tasty.