Godzilla Vs. King Kong spends one hour, eight minutes of its one hour, fifty-three minute run time sputtering along until it finally decides to reveal its true plot. Leading up to this, you do see one good action scene, and a whole bunch of wasted time full of filler human actors being useless characters, surrounded by explosions and CGI in abundance. 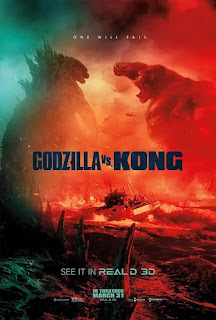 Rebecca Hall's character, Ilene Andrews easily takes home the award of, "Worst Mother of the Year," for dragging her deaf daughter throughout numerous locations and dangerous situations full of beasts the size of your average sky scrapper. As explosions surround them, and death comes close multiple times, not once does she show any level of concern for her daughter's well-being. Instead, she continues to use her as nothing more than a convenient mouthpiece to communicate with Kong via sign language.

Millie Bobbie Brown continues her famous wooden acting trick, made popular from her appearances in Stranger Things, delivering dialog with no emotion or depth. Though she tries to come off as a tough girl, she instead invokes laughing. I guess if she was going for the comedic relief of the film, which I don't think she was, she fails in every aspect of her performance.

As for the remainder of the cast, they're wasted with poor dialog, useless side plots and little to no meaning beyond serving as the audience's human connection to the film. The majority of them make poor decisions, put themselves in needless danger, and in general serve no purpose to the overall film.

If you're looking for loud explosions, tons of CGI action and giant creatures battling it out for alpha male supremacy, then yes, you will find that there. However, if you're looking relatable characters that are well fleshed out, that you won't find. Nor do I really think that was the intentions of the creative team behind Godzilla Vs. Kong.

At it's core, the film is a summer blockbuster popcorn movie. It serves its purpose for what it intends to deliver on, but beyond that is nothing most people will remember three months down the road. But, I suppose if you were expecting more than that, I would suggest your expectations may have been a bit too high, if not unrealistic.

Posted by The Toy Box on April 10, 2021
Email ThisBlogThis!Share to TwitterShare to FacebookShare to Pinterest