Photo goes to the right.

My exposure to The Grateful Dead has been an unwilling forcing upon by a co-worker who lives and breaths by the band. He's what they call a Deadhead. He follows the band around to this day, going from show to show, buying every bit of music he can get from them. He's a hippy to his core, and I don't think I've ever seen him get angry. Even when pushed to what many would consider the limit. That just wouldn't be groovy.

I myself have pushed and pushed him about his love for the band, reminding him that he's a burnout and making fun of his love for Jerry Garcia - As guys often do to their friends. It was because of this, I immediately texted him to let him know that I was firing up their first album to finally give them a fair chance.

Look, I could sit here and try to hammer out a history of the band to lead into my listening of the album, but at this point in their history, I would probably do them a great disservice in trying to do so. Instead, I would suggest anyone looking for any information on them to find a better source. 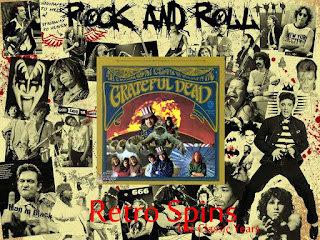 As for the album, or rather, my opinion of it, in terms of sixties music, I suppose it wasn't bad. It wasn't mind blowing by any means, but then again, as a child of the 80's I don't necessarily have the perspective of their impact of their time. Kind of like how The Beatles are considered to be such a revolutionary band, but in today's terms, it's just classic rock.

Did I hear anything that made me want to hear anything further from The Grateful Dead? No. Did I hear anything that got added to my shuffle list? Also, no. While I'm listening to a lot of classic rock as of late, the truth of the matter is that this style of music isn't my favorite. I'm an 80's child, and that's my sweet spot when it comes to the sounds and songs. Still, I want to give some of the sixties and seventies icons a try to see if any of them can change my perspective.