Richard Marx had some pretty decent hits in the 80's, but he was never really someone I paid much attention to. By 1987, when his self titled album debuted, I was more so into heavy metal - Or hard rock as it would probably be categorized these days in comparison to the noise which constitutes as metal.

What's ironically interesting about Marx is his connection to Whitney Houston, who I talked about in last week's Retro Spin. He became the first male solo artist to have four tracks from a debut album hit the top three spot in the Billboard Hot 100. He was second, overall, to Whitney Houston - Who was first to achieve this. 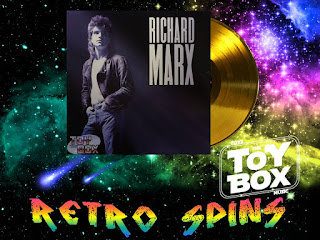 Much like Houston's album, I can easily pick out the four tracks, without even looking at the list; Should've Known Better, Don't Mean Nothing, Endless Summer Nights and Hold On To The Nights. Am I right? A quick fact check confirms - Yes.

This conclusion was easy to come to because unfortunately beyond these four tracks, the rest of the album is pretty big dud. The remaining six tracks just aren't interesting, catchy or memorable at all. At forty-five minutes, it may even be too long. I constantly found myself checking to see what song I was on because I honestly just wanted the album to end. Unlike Sly Fox's album, Let's Go All The Way, I did actually manage to make it through this one without turning it off. So it at least has that going for it.

Overall, I like the hits from Richard Marx. He had quite a few between this album and his follow up, Repeat Offender (1989) album. But I think that's where it starts and stops for me with him.

Click "HERE" to go back to the home page. For more posts related to this one, please click the labels below.
Posted by The Toy Box on April 13, 2021
Email ThisBlogThis!Share to TwitterShare to FacebookShare to Pinterest
Labels: 1987, 80's Album Review, 80's Music, 80's Music Review, Music of the 80's, Retro Spins, Richard Marx