Why Sports? There's no songs on the album about football, basketball, baseball, soccer, etc. So what's the correlation here?

Sports was the hit album Huey Lewis & The News needed. It was their third and final contractually obligated album with Chrysalis, and if it didn't pan out would have most likely been their last. Fortunately for the sextet it delivered four hits and a multitude of success which would eventually lead the band to an offer from Coca Cola, which they declined, and the soundtrack to Back To The Future - Which skyrocketed them into orbit with their monster hit Power Of Love.

The irony of the band was that they weren't a group most people in the 80's dared admit they listened to. At least not in the circle of kids I ran with. They weren't rad, and you weren't cool if people heard the likes of Heart and Soul coming from your lips.

But I'm an adult now, darn it, and I don't need peer approval for the music I like and listen to. While I won't proclaim them as my favorite band, not even close, I'll admit they have some great hits which I enjoy listening to. 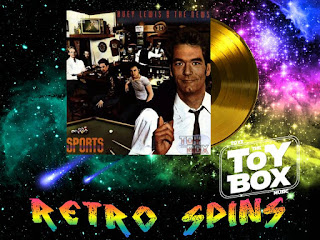 Sports delivers with tracks like, The Heart Of Rock & Roll, Heart And Soul, I Want A New Drug and If This Is It. As I typed that last sentence, and sit here thinking, I believe my introduction to the band was actually through "Weird Al" Yankovic's parody, I Want A New Duck (Dare To Be Stupid - 1985).

A couple of "new" tracks from the album which caught my attention were, Walking On A Thin Line, Finally Found A Home and You Crack Me Up. I went ahead and added them to my 80's mixes for future listening sessions. It will take  few more to determine if they were just decent or will actually stand the test of time.

Overall, Sports was a pretty decent album. While it didn't leave me clamoring to hear more from the group, it definitely didn't turn me off of the idea either. I'll make it a point to have a list of their 1986 follow up, Fore! in the near future.

Click "HERE" to go back to the home page. For more posts related to this one, please click the labels below.
Posted by The Toy Box on April 20, 2021
Email ThisBlogThis!Share to TwitterShare to FacebookShare to Pinterest
Labels: 1983, 80's Album Review, 80's Music, 80's Music Review, Huey Lewis And The News, Music of the 80's, Retro Spins, Sports