A ton of stuff went up for pre-order for Pulse members, but don't feel left out if you're not among them. Everything goes live to the general public as of 5:00 PM EST today. Make sure you check in with them sooner than later to ensure you get an opportunity to grab what you're looking for.

As for me, I nabbed up a set of the upcoming wave of Snake Eyes: G.I. Joe Origins figures, which are being incorporated into the G.I. Joe Classified line. In fact, if you've been keeping up with my posts here on the series, you may recall when I last posted about the figures, I noted that there were five figures missing between Profit Director Destro (15) and Firefly (21). While I first speculated that two of these were the upcoming Lady Jaye and Flint, those two ended up being numbers twenty-five and twenty-six.

With five new figures dedicated to the Snake Eyes film, will these be the characters that finally fill in that number sixteen through twenty gap? I can't imagine they won't be. In fact, I'd be really surprised if they didn't. 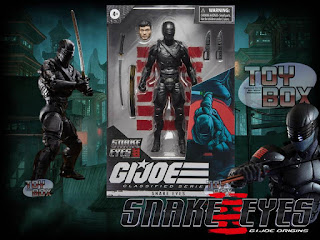 Being a wave based on the upcoming Snake Eyes film, naturally, we get another Snake Eyes figure. Meh...I suppose if we have to. I'd be lying if I said I saw what all the fuss was about this particular character and his counterpart, Storm Shadow.

Speaking of the latter, we of course get that figure as well. Of them all, this is the one I would be eager to get. The opportunity to finally get a somewhat Cobra team accurate version is enticing. If only it had the Cobra insignia on the chest. I do hope the character gets a true Classified release, vs. a sub series / movie one. 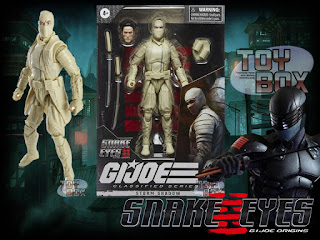 Keeping on par with rehashed figures, the line will also deliver an all new version of Scarlett. With exception of the face, which I assume is based on the actress playing the role, I have to admit I really like the design of this figure. The armor is super sweet. It's kind of got a Boba Fett armor vibe to it. 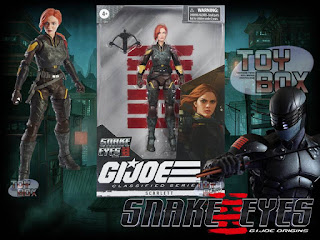 An all new character for the film, and series in general, is Akiko. I have no idea who this is. I'm sure it will be a love interest for Snake Eyes, probably a love triangle scenario incorporating Storm Shadow into the mix, and only fanning the flames all the more for why the evil ninja hates Snake. To date, Jinx's name remains classified. So who knows, maybe this will be who evolves into her. 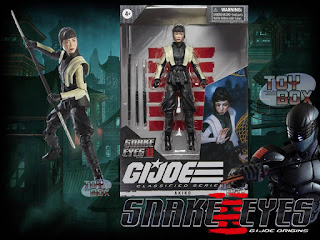 Last up is a really awful take on Baroness. That face, again, assuming it's on the actress, just doesn't work for the character. I'm also not sure what's up with the choker necklace and that hair. If this is Hasbro's idea of appeasing fans who weren't able to get the Cobra Island version with the bike, I don't see this working at all. On a side note, I dig the MP5 and removable suppressor. 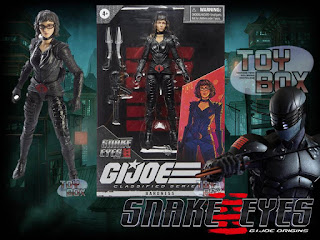 Overall, it's not a bad wave of figures, but I'd be lying if I said I was excited for them. I'll pick them up to check a completion box, but these definitely don't ignite any sparks for me. Personally, I'd rather see more new figures from the vintage line, such as Barbecue, Bazooka, Quick Kick, Xamot, Tomax, and...you get the point.

I suppose if there's a silver lining, none of these are Target ebay exclusives.