Russ Berrie & Company was founded in a rented garage in 1963 by the man of the same name. From its inception, it produced a plethora of customer favorite items which took up residence across countertops, desks and dashboards across America. Among these was their most popular plush toys, Fuzzie Wuzzies, troll dolls and the Bupkis Family. Their items were so popular, that by 1966, the companies sales exceeded one million dollars.

Since then, it's become one of the most successful small businesses across the United States, recognized by Forbes, and with sales topped at two hundred eighty-five million. It's because of this, if you owned a stuffed animal, or any of the aforementioned products, then you may have unknowingly owned a Russ brand item, and didn't even know it.

Though the company has an extensive catalog of toys, today I want to hone in on one specifically. Their stuffed dog, Puddles, which assumable was released between 1986 and 1987. 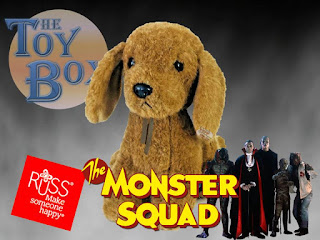 At a glance, this nine to ten inch plush would look like just another common stuffed dog. However, there's history to this one, which to the most formidable nostalgic collector makes it a little more desirable than your average run of the mill stuffed animal.

Puddles can sometimes go by another name, Scraps. This persona was seen in the 1987, unfortunate flop, Monster Squad. He's toted around by Phoebe in practically every scene which she's in and plays a formidable inanimate role throughout.

Though it was relatively unknown to most fans of the movie, Kelly Kinsley solved the thirty year old mystery of Puddles in March of 2020, sharing a side by side photo of the two. No doubt it was an identical match. 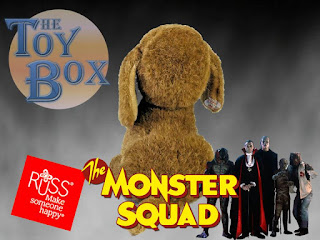 Though Monster Squad's ten million dollar budget may have bombed at the box office with only three point eight million in returns, there's no doubt that since then it has gained a successful cult following. As word spreads about Puddles, I'm sure fans will jump at the opportunity to grab a bit of physical nostalgia from the film. Currently, they can do so for around fifteen dollars.

Click "HERE" to go back to the home page. For more posts related to this one, please click the labels below.
Posted by The Toy Box on April 19, 2021
Email ThisBlogThis!Share to TwitterShare to FacebookShare to Pinterest
Labels: 1980's, Monster Squad, Puddles, Russ Berrie Company, Scraps