My favorite David Bowie song is so obscure, that nobody would ever guess it. Despite his many hits throughout the 1970's and 80's, which are great,  you won't find it amongst your Space Oddity's, China Girl's or Magic Dance's. Nope. You would need to go all the way to the 1992 soundtrack for the title track, Cool World, to find my favorite.

Though he had achieved major success far prior to this, my introduction to Bowie didn't occur until 1983. In retrospect of my childhood, it's funny how when you don't know about an artist until your particular era, that you can't fathom they had been around long before that. To me, artists like David Bowie, Peter Gabriel, Phil Collins and even Fleetwood Mac, were new artists in the 80's. They didn't exist prior to me hearing them for the first time with their, at the time, current hits.

Bowie consecutively released albums from 1967 through 2016, with very few breaks in between. Throughout his career, he evolved from hippy, to glam rock, to full suits and ties, and on. No one era can truly define his legacy as an artist. He managed to do what so few musicians could, evolving seamlessly from decade to decade, staying relevant throughout as one of the front line forerunners.

Tragically, he passed away just two days after the release of his 2016 album, Blackstar. Bowie had been suffering from liver cancer, but kept this out of the public's eye. I respect that. He wanted people to remember him for who he was. Not be bombarded with unwanted attention and focus for his illness. 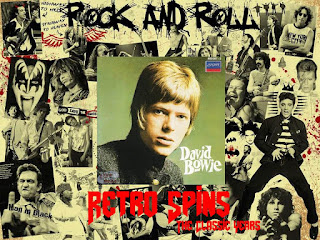 I pay my respects to him by going back to his 1967 debut for today's Retro Spins. As the album started up, I picked up on the psychedelic rock style, reminiscent of the era the album is from. It's on par with the like of The Doors, Big Brother And Holding Company, The Who and so many more staples of the late 60's.

I found myself grinning to the lyrics of the first track, Uncle Arthur. I feel he and I would have been great friends amongst the lyrics, "Uncle Arthur, still reads comics. Uncle Arthur, follows Batman." That's my kind of people.

Bowie has a unique voice, that regardless of the song he's singing, sucks you in, and this is what I found kept happening to me. I enjoyed everything, not necessarily for the music or lyrics, but his voice. It's funny how when you listen to older albums that the artists sound different, because of their age. For example, you can definitely tell that James Hatfield was in his early twenties when you hear Kill 'Em All, vs. being in his late twenties for the black album. His voice changed that much over eight years. However, with Bowie, he sounds exactly the same at the age of twenty as he did in his sixties.

Unlike many of the debut albums I've been listening to as of late, I would totally recommend this one. It's pretty good. It makes me want to hear more from him, and as we all know at this point, that's the ultimate goal of these Retro Spins.

It was interesting to learn that Deram, the label Bowie released his debut album on, dropped him among poor sales. What they failed to acknowledge was that in 1967 he was contending with the likes of The Beatles' Sgt. Pepper. Their loss I suppose, as he would go on to release his second self titled album in 1969 featuring Space Oddity. So they can go ahead and file that one under, "Oops."

Disclaimer: They Toy Box does not endorse or contribute to piracy. Retro Spins posts are intended for educational and entertainment purposes only. None of the music discussed here is available for sale, downloading or distribution.
Posted by The Toy Box on August 11, 2021
Email ThisBlogThis!Share to TwitterShare to FacebookShare to Pinterest
Labels: 1967, 60's Album Review, 60's Music, 60's Music Review, David Bowie, Music of the 60's, Retro Spins