For as much as I dig the 80's music scene, I have to admit, if there's another era that has my attention, it's those jukebox years of the fifties and sixties. I'm talking the classics of the Big Bopper, Chuck Berry, The Angels. It was an era of malt shops, classic cars and what would become The Motown Sound.

Motown defined an era of artists, bringing with hit powerhouse solo artists and groups like Diana Ross and the Supremes, The Jackson 5, The Marvelettes, Marvin Gaye, Stevie Wonder...We'd seriously be here all day listing them all out. All of this was led by the founding musical genius, Barry Gordy Jr., who served as executive, songwriter, and producer. A man of many hats, he had an ear for talent, and knew it when he saw it.

Gordy launched the label, Tamla in 1959. However, by 1960, he had moved on to form Motown Records. Despite this, many of the original debut albums appear on the Tamla label, such as today's Retro Spin, The Miracles "...Hi, We're The Miracles". Motown and Tamla would eventually merge and become one company, The Motown Record Corporation.

Hi...We're The Miracles is a pinnacle album in a couple aspects. It's not only the debut album for the group, but also the first album ever released on the Tamla label. The first iteration, and most popular, we Smokey Robinson, Ronnie White, Claudette Robinson, Warren Moore, Bobby Rodgers and Marv Tarplin.

1964 would see the first change to the group. Claudette Robinson would cease touring with the group. Though she remained a member, recording in the studio on further albums for the next several years.

In 1965, the group's name was officially changed to that of Smokey Robins And The Miracles, and they continued on until 1972, when Smokey and Claudette would exit. However, despite his exit as lead singer, Smokey would remain as executive producer for the group's 1973 album, Renaissance.

The Miracles left Motown after their 1976 album, Night Life. However, by this point their records had long since been in a sales decline. They signed with Columbia, and released three albums between 1977 and 1978 before stepping away from the studio life.

1987 brought with it much controversy when Smokey Robinson was inducted into the Rock & Roll Hall Of Fame, but not his fellow group members. He himself voiced his disappointment in the decision, as did several of The Miracles. As the first group for Tamla, they essentially created the Motown sound, and developed the environment that would lead many artists on to lustrous careers. To be so poorly shunned was simply put, insulting.

Smokey Robinson would reunite with The Miracles multiple times over his successful solo career. Perhaps the most popular was the venue which saw a major resurgence in Motown popularity for many groups. That event, Motown 25. But that is a major tale for another day. 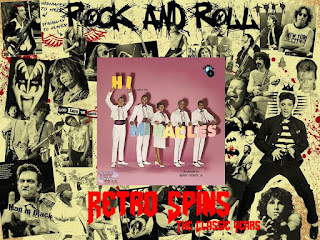 For today, I'm spinning up the original debut album, Hi...We're The Miracles.

Hearing this record I was immediately transported in my mind to an era I never got to experience...Because I wasn't born. However, I have to admit that if I had a time machine, I would go back to yesteryear. To simple life USA, where kids sat inside malt shops, sharing shakes through two straws, putting dimes in jukeboxes, and dancing together in whatever space they could find.

Their debut features a ton of hits, can in a retrospective listening, I can fully understand how they were launched to stardom so quickly. Who's Loving You, Shop Around, and Money are just a few of the classics you'll get here, and it's well worth taking the time to listen to just for those.

This is a solid album. It's fun, it's innocent, and most importantly, it's chalk full of great tunes. If you're down with hearing some of the icons from their inception, then check this one out!

Disclaimer: They Toy Box does not endorse or contribute to piracy. Retro Spins posts are intended for educational and entertainment purposes only. None of the music discussed here is available for sale, downloading or distribution.
Posted by The Toy Box on August 25, 2021
Email ThisBlogThis!Share to TwitterShare to FacebookShare to Pinterest
Labels: 1961, 60's Album Review, 60's Music Review, Hi We're The Miracles60's Music, Music of the 60's, Retro Spins, The Miracles