As I continue some well needed time off of work, I used today to head to McKays Used Books, Movies, Music, Etc. Yes, that's the store's name. 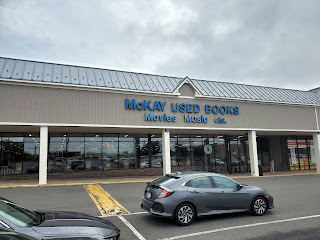 Though there are many things I like about this store, the first thing that McKays absolutely deserves credit for is being thoroughly clean and organized. 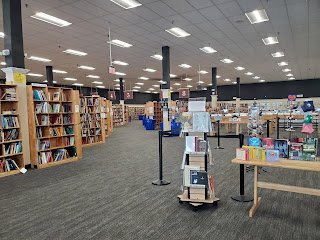 My goal for today was two sections. 1) Cartoons, and 2) CD's. However, before I jump into this, let's go a little virtual tour of the store. 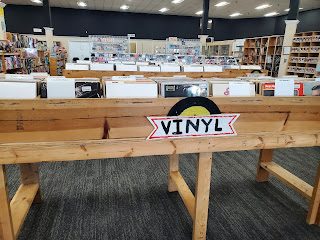 Take note, CD Depot, this is how your music should be organized. 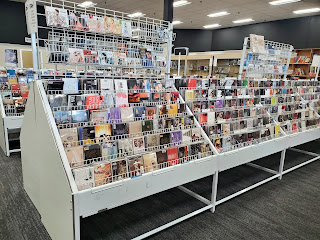 Though I don't collect NERF guns, I have to admit that this is an amazing way to display them. All lined up on a wall like a plastic armory. Brilliant! 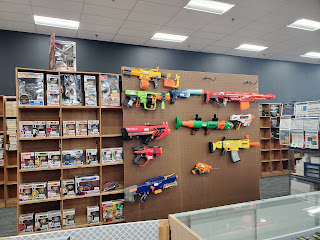 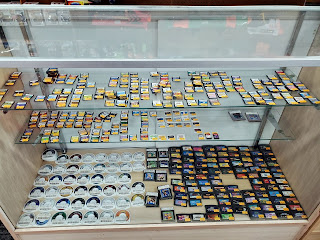 Of course, you can't swing a stick anymore without hitting a Funko Pop. I am so glad that I got out of collecting these. 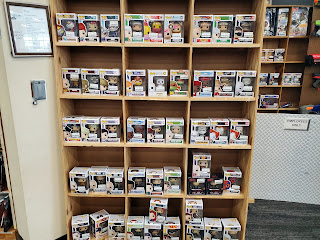 I almost picked up that Super NES copy of A Link To A Past, but ultimately decided I wouldn't play it any time soon. 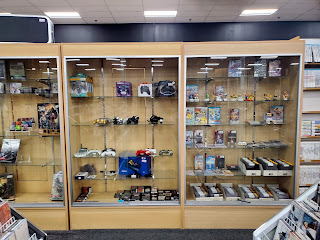 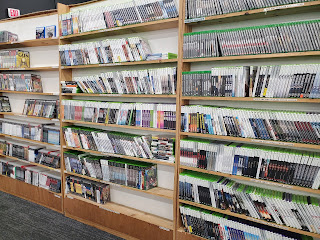 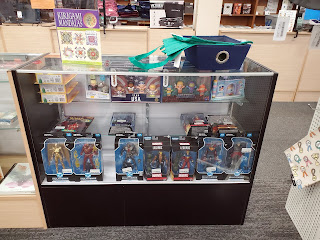 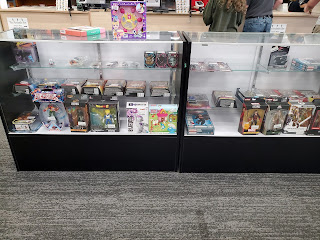 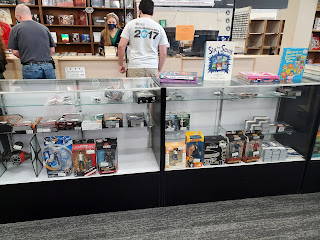 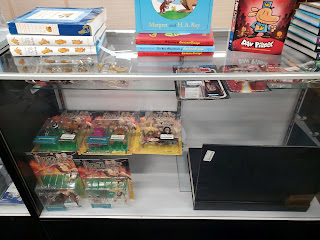 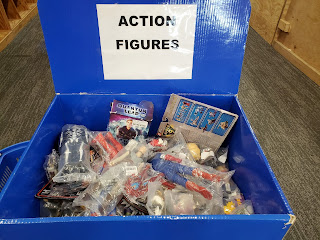 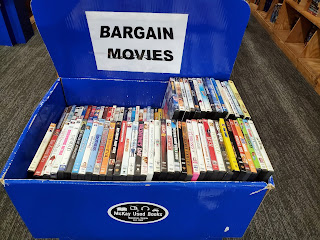 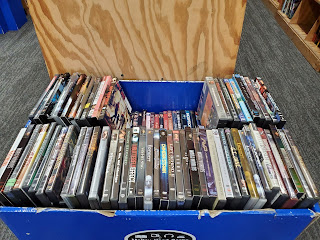 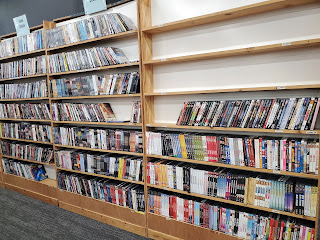 The corridor of DVD's. Each shelf is labeled on each end to tell you what you're getting into, and then again on the top of each section. Like I said, this place is organized. 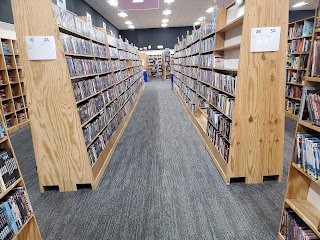 Though I didn't take any photos, this place mainly specializes in used books, and they have a ton of them.

I started my search in the cartoons section, and while I easily found a ton of stuff I could have left with, I whittled down my selection to just three DVD sets. The complete series of The New Adventures of Mighty Mouse, and The Smurfs, season one, volume one and two.

It's a real shame we can't get anymore Smurf's seasons here in the USA. 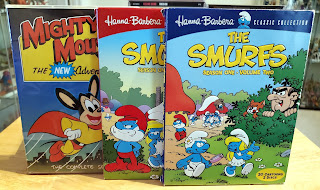 I wanted to grab their Flintstones, Muppet Show, Rocky & Bullwinkle, and Musters DVD's. However, with the exception of the last, these were missing volumes. If I'm going to buy these, I don't want holes in it, and the fuss of tracking down said missing items from other sources. I passed on the Munsters because I'm trying to stick to only cartoons. It killed me to have to put it back, but I've owned and sold so many DVD's over the past that I just don't want to get carried away with them again.

Next up was the CD section, where I got this. 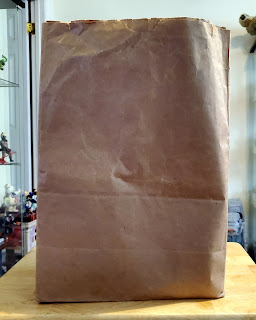 Yes, a grocery bag. One filled from bottom to top with CD's.

This leads me to the second thing I really like about McKays. Their prices are fair. While many of their CD's range from five to ten dollars, you're also going to find a lot priced as little as fifty to ninety-nine cents. It's because of this that I'm also willing to spend more than I originally intend to, because even a bad CD with one song on it that I know is worth a dollar (or less). At least to me it is. We'll talk about plenty of those below.

But first, here's a look at everything that came out of the bag.

Okay, let's do this in order by starting with the 70's, and anything that came before that. 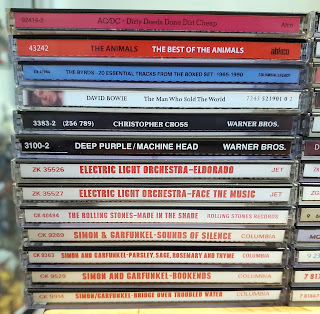 I admittedly don't have a lot of knowledge of music from this era, but I do know what's been played on classic rock stations, as well as in movies. This is typically where I stay focused, not tending to stray far from the beaten path.

Today's pick-ups included AC/DC, The Animals, The Byrds, David Bowie, Christopher Cross, Deep Purple, Electric Light Orchestra, The Rolling Stones and Simon & Garfunkel. Though I didn't initially intend on grabbing the latter, when I saw that they had four of the five studio albums, I decided to just go ahead and do it. Regarding Electric Light Orchestra's Face The Music, this was an original pressing intended to replace my re-issued copy.

As for The Animals and The Byrds, I recognized some songs on these compilations and decided that I would go ahead and grab them. This way, even if it didn't pan out that I liked much else, I would still have the tracks I knew.

The rest of these albums were on my want list, and I was happy to finally check them off. 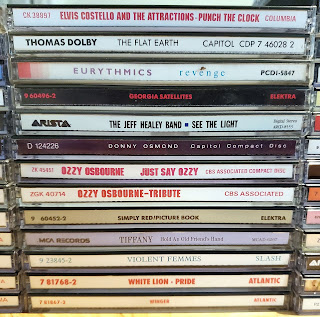 Which brings us to the 80's. My area of expertise. The decade of music I listen to the most, and seem to have a head chalk full of useless knowledge about. I have been hacking at my want list of 80's albums for several years, and it's down to just sixty-five more. Admittedly, many of them are a bit obscure, and at this point, I don't think I'm going to find too many more out in the wild.

Today's haul included Elvis Costello, Thomas Dolby, Eurythmics, Georgia Satellites, The Jeff Healey Band, Donny Osmond, Ozzy Osbourne, Simply Red, Tiffany, Violent Femmes, White Lion and Winger. Now, I'll be the first to admit that out of these albums, only six were on my original want list. When it comes to 80's music, I'll frequently pick up CD's for artists I am familiar with, if for nothing else, to add the album to my collection.

This is what happened with Thomas Dolby, Eurythmics, Ozzy Osbourne, and Tiffany. However, regarding the Thomas Dolby album, it actually ended up having a song on it that I wanted. I also picked up a first pressing of White Lion's Pride to replace my remastered edition.

My biggest problem with this particular era, is that for every one album I check off my list, two or three more crop up as something I had forgotten about. I'm constantly watching those videos on Youtube noted as, "100 (best) (forgotten) (hit) 80's songs," which leads to my list continuously growing. 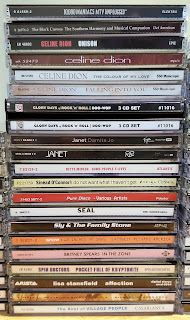 Next up is the CD's from the 90's, you know, that era I constantly say I don't dabble in much, but yet seem to have accumulated a massive collection of. First thing to note about the way I organize my CD's is by the era they're from. It's because of this that you'll see in this photo things such as, The Village People and Disco Hits. While the music is from the 70's, the CD's themselves came out in the 90's / 2000's.

Today's hull included 10,000 Maniacs, The Black Crowes, Celine Dion, Janet Jackson, Bette Midler, Sinead O'Connor, Seal, Snow, Britney Spears, Spin Doctors, Lisa Stansfield, Traveling Wilburys, and a couple compilations and greatest hits. Now, it's worth stating that I would not have purchased half of these if it weren't for the price. For example, each Celine Dion CD I purchased was only fifty cents. In fact, I don't think any of the CD's in this stack cost more than ninety-nine cents each.

Even the three disc Glory Days of Rock 'n' Roll was under a dollar. My exact words when seeing this 60's doo-wop set for less than a dollar was, "Well, if you're just going to give it away, I'll take it."

Like I said, if there's at least one song I know, the price was right. The price of one digital song on itunes for the price of the entire disc on physical media. Totally worth it to me. 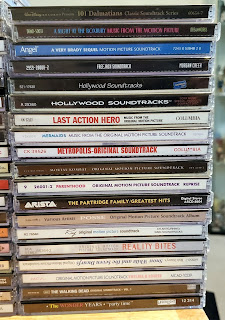 Last up is my favorite section to peruse, no matter what CD store I'm at - The soundtrack.

Movie soundtracks have long since been a great way to get tracks that never make it to a studio album. They're great compilation albums, that just so happen to often times have awesome themes songs to some of the greatest films out there. Soundtracks are awesome! Especially the ones from the 80's.

Today I found 101 Dalmatians, A Night At The Roxbury, A Very Brady Sequel, Freejack, Last Action Hero, Mermaids, Metropolis, Mortal Kombat, Parenthood, The Partridge Family, Posse, Ray, Reality Bites, Snow White And The Seven Dwarfs, Thelma & Louise, The Walking Dead, The Wonder Years, and even two Blockbuster exclusive compilations of movie hits. Best of all, the price. You guessed it, ninety-nine cents for the majority of them.

Though I didn't grab any more than that, I certainly could have. There were at least ten more that had various artists, mostly from 90's movies, but I left them there. In hindsight, I wish I would have grabbed The Cable Guy at least. Oh well.

And with that, my day at McKays was wrapped up, and I headed to the register. I know the people there must hate people like me. The reason being, they have to open up every single CD case and confirm the CD inside is the correct one. The young lady who checked me out was incredibly friendly, engaging me in music talk, and overall was just kind. Despite how long it took for her to go through everything, ring it all up, and then bag it all, she was so kind that it was just as enjoyable as searching as the shopping part.

Now begins the part of ripping them all to digital so I can take them on the go with convenience. That's going to take a few days. Ugh...Then I have to put them all away. I never was a fan of that part.

Posted by The Toy Box on August 17, 2021
Email ThisBlogThis!Share to TwitterShare to FacebookShare to Pinterest