Retro Spins: Bow Wow Wow - The Last Of The Mohicans

Bow Wow Wow's Last of the Mohicans is technically an EP, and not a full fledged album. With just four songs, and a short run time of twelve minutes forty seconds, it's just enough to give you a taste of candy from the punk quartet.

The album is raw and sharp with a strong punk sound. Considering it featured three of The Ants, formerly known from Adam And The Ants of the infamous rocker, Adam Ant, it was no surprise for the sound of the EP to hit so hard. 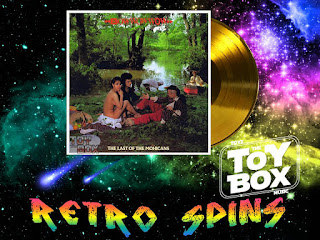 The biggest disappointment with it all is just as you're getting into it, the EP ends. All four tracks are solid, and a no brainer introduction to why the band suddenly launched into success around the world. Their video for I Want Candy certainly did nothing short of helping fuel their popularity.

It features the tracks, I Want Candy, Cowboy, Louis Quatorze and Mile High Club. I Want Candy is definitely the stand out track from the album, in terms of "hits", but the remaining three songs are equally as good.

With pretty much instant success, RCA quickly capitalized on the opportunity by way of releasing I Want Candy, a full fledged, if not compilation, album. I say compilation because the first side of the record was nothing short of the full EP plus one additional song, Baby, Oh No. Meanwhile, the second side contained select tracks from the band's prior RCA album, "See Jungle! See Jungle! Go Join Your Gang Yeah, City All Over! Go Ape Crazy!" Yeah, no joke. All of that gibberish was the album title.

To bad the band cut their own success short. They released a second album, When The Going Gets Tough, The Tough Get Going, in 1983. They then followed this up with a tour. However, shortly afterwards, they randomly fired lead singer, Annabella Lwin, who found out she had been unceremoniously fired from the band by reading a copy of NME. The remaining members went on to form a new group.

Still, for that short moment in time, Bow Wow Wow was a thing. A popular thing. A good thing. If you're into punk, or obscure 80's music, you may want to consider grabbing this one. Just know, it's only available on record, if you want the actual album itself. Otherwise, look to the compilation I Want Candy for a CD version.

Click "HERE" to go back to the home page. For more posts related to this one, please click the labels below.
Posted by The Toy Box on August 31, 2021
Email ThisBlogThis!Share to TwitterShare to FacebookShare to Pinterest
Labels: 1982, Bow Wow Wow, The Last Of The Mohicans