A Saturday (Preemptive Birthday) Outing With My Brother

Leading up to my birthday, my brother paid me a visit on Saturday, August 14th, and off we went on an adventure, hitting numerous stores to spend the day in nostalgic bliss.

The day started at my local comic shop, Comic Logic, where I took part in the very long line outside for Free Comic Book Day. The weekend long event was put on my radar by Spyda over at 20 Years Before 2000. Some of you may recall that last year he was kind enough to brave the pandemic and not only obtain the Spider-Man book I was wanting to get, but also to send it to me.

I was seriously shocked to see how many people were waiting for books. Naturally, there was that one person who stood out in the crowd as the only cos-player in the bunch. For whatever reason, she came as Slave Leia. I think to her displeasure, nobody took notice, asked for photos, or in general, acknowledged she was even there. 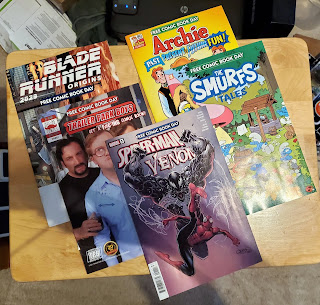 Of the many free comics that were available, my main two I wanted were Spider-Man / Venom and Smurf Tales. However, while there, I picked up what we'll call, "Bathroom titles".

From there, we headed down the road to eStarland, a diamond in the rough for all things vintage and current gaming. This store has every console you could think of, and yes, the games and accessories to go along with them. Typically, I can't leave this store for less than a hundred dollars. Which makes today an odd one. I left with nothing. After perusing the NES section, there simply wasn't anything there that I wanted.

Though our next stop was going to be to a used record and CD shop, we made a b-line to a store a mile away from eStarland called, 2nd And Charles. I am so glad we came here.

The store is essentially a giant used books, CD, and movies store, that just so happens to also sell some new stuff. They also have a few select toys, mainly Funko Pops. No surprise to any of you there, I'm sure.

After searching through the entire kids section, I left with some fantastic 80's cartoons on DVD. 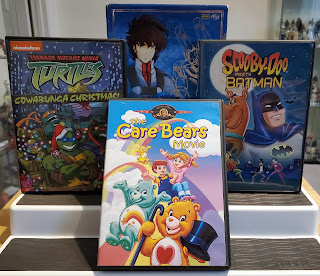 The 1984 Care Bears Movie, the original Scooby-Doo Meets Batman, which features two classic Batman crossover titles from the original 1972 Scobby-Doo Movies, Teenage Mutant Ninja Turtles: Cowabunga Christmas, which is actually from 2003, and the masterpiece in the back row.

Do you see it? That giant blue box? That, my friends, is the 2005 released, twenty-one dvd, complete set of the entire 80's Robotech series.

I got all of these DVD's for under fifty dollars! You can't even buy that Robotech set for less than that on ebay.

Speaking of ebay, while we still had several outings ahead of us, as I was typing this post, I remembered I had put a bid in for the rare Captain N: The Game Master and Super Mario World complete series on DVD, and actually ended up winning that for under fifty dollars as the only bidder! Happy birthday to me! That set usually sells for around a hundred dollars.

Okay, back to my outing...Even though it's hard to type because I'm still so high on the excitement of today's outings and my ebay win.

As our next stop, we finally made it to the used CD store, CD Cellar. All of you steady readers of The Toy Box know how much I enjoy my music, and I can get in to trouble fast at a store like this. I've only been about five or six times, and usually don't leave for less than $400.00.

Today, I showed much restraint, staying cognizant that I had another outing tomorrow and Monday planned, and to not blow my entire stay-cation / birthday budget in one day. I spent just a bit over seventy dollars, and with the exception of one, came away only with CD's I absolutely knew I wanted. 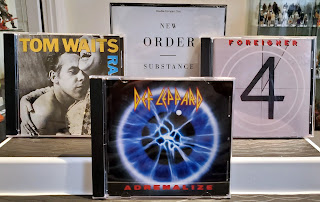 Tom Waits is the original singer of the song Downtown Train, which many people only remember for the 1989 Rod Stewart version. His 1985 album, Rain Dogs, which features the song, has been on my want list for a long time. I was both happy and surprised to find it at the store, and shocked at how large the selection, in general, was for the singer.

I was hoping to find all the New Order albums I wanted at the shop, but was happy to at least come away with 1987's Substance.

After loosing a little 80's street cred the other day, I decided to make amends by picking up the Adrenalize album from Def Leppard. Yes, I know. It's a 90's album. For the whole story, you'll have to check out the comments section of my post on Hysteria. George of G.I. Jigsaw was not impressed with my having not heard Pyromania, despite having owned the album for years.

As for Foreigner 4, I picked this up because it was the right price to replace my remastered version.

I don't like much Elton John, but I do enjoy some of the tunes that frequent his various greatest hits albums. Three of these four fit that bill. As for the self titled disc on the bottom right, I picked this up in hopes that it was his debut album. Though it technically was the first of his records released in the USA, it's actually his second studio album.

There are a few David Bowie albums on my want list, these three among them. Ever since hearing his debut album, I've been itching to start filling holes in my collection, and hear more from him. Bowie is actually who I went to the CD store for. Everything else was just a bonus. I'm actually listening to Space Oddity, the album...and song for that matter, as I type this.

From here, we headed to Super Bit Video Games, which was just down the street from the record store.

It never ceases to amaze me how quickly this store is able to get their hands on vintage games, replenishing their stock, while also having hard to find titles that you just don't want to leave without. I ended up buying three games, and getting an additional one from my brother for giving him a thumb drive full of music.

Though I could have easily spent two hundred dollars more, I had to show restraint to ensure I had some spending money for my latter day outings. Xevious is a game I've been looking to get for a while, and for how common (and cheap) it is, I'm shocked by how, until today, it has continued to allude me. I'm glad to check this one off my list.

Captain America And The Avengers was a game I used to have as a kid, and played a lot. Of the three games I bought, it was the most expensive. I guess I didn't realize that this one wasn't a common game in the wild.

Wolverine was also a game I had as a kid, and when I saw it sitting next to the Avengers game, I pretty much decided then and there that I wasn't leaving without both of them.

As I mentioned above, my brother picked me up a game to repay me for the thumb drive I gave him. That game was Journey to Silus, the Sunsoft game originally intended to be a game based on the film, The Terminator. Though it wasn't on my want list, persée, it is one I've been intrigued by for a while. With that said though, had it not been bought for me, I probably would have never gotten around to it. Still, happy to have it in my collection. Though in hindsight, I really did need to replace that thumb drive, which was my brother's original intentions. Oh well. thumb drives are easy to find in the wild. Journey to Silus is not. I still made the right choice...Didn't I?

After stopping home to clean games and test them all out, my brother insisted I open the box he got for my birthday. That post is coming a little later today. So for now, I'll wrap this up by saying it was very generous, and he topped it all off with a visit to my favorite Indian restaurant for dinner before he headed home. Than delicious dinner will also help me get to those comics, if you know what I mean!

All and all, this was a fabulous day. I got to see my older brother, we spent some great time together hopping around Northern Virginia, and topped it off with a great meal. This is definitely a cherished one for the memory banks.

If you're just now tuning in to The Toy Box for the day, make sure to check out the prior posts from today. There's also more to come, so check back later.

Posted by The Toy Box on August 16, 2021
Email ThisBlogThis!Share to TwitterShare to FacebookShare to Pinterest
Labels: Birthday