G.I. Joe Classified hits hard with an all new deluxe pack in the form of Snake Eyes & Timber: Alpha Commandos. Not only do they deliver on a homage of the original 1982 Commando, but the 1985 released Timber. 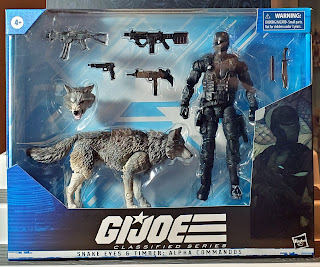 While the artwork isn't updated with any new images, the sheer size of it makes it pop like never before. 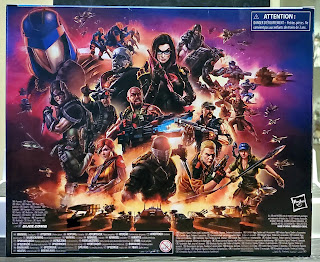 Commando, or Snake Eyes if you please, is number thirty in the series, which puts him between Breaker (29) and Master of Disguise Zartan (31), two figures which technically have not been released yet.

Popping the figure open, it certainly looks great. However, if there's one thing I don't like about it, it's the logo and 00 on the grenade which is attached to the figure's chest. It sticks out like a sore thumb. It would have better to just leave the whole figure varying degrees of black. 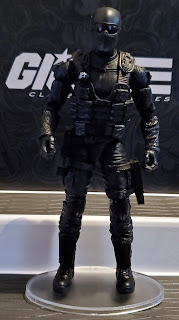 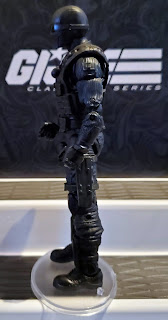 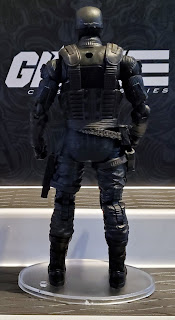 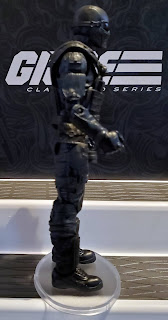 Figure aside, the true greatest feature in the package is Timber. 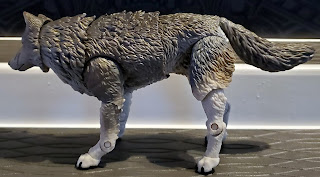 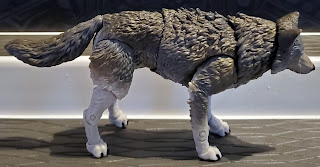 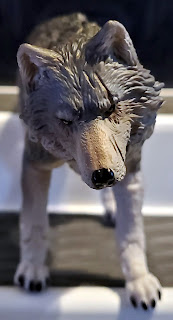 Seeing the amount of detailed poured into the wolf excites me all the more to see what Hasbro could do with a six inch Croc Master, one of my favorite vintage figures from the 1987 wave. 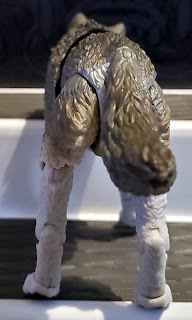 Being a deluxe figure, you know it comes with a slew of accessories. Various guns, a knife, suppressor, and even a second head for Timber fill this set out nicely. Additionally, the two larger rifles have removable magazines.

Unfortunately, there aren't enough slots or pegs to store all the weapons on the figure. One of the features on the earlier figures was pegs molded into the weapons. However, I don't think this aspect was well received by fans, and it appears Hasbro has stopped implementing this. Admittedly, it did look bad, but it at least allowed you to store weapons more efficiently.

All decked out, this figure checks every box for classic G.I. Joe turned six inch Classified. It's pretty amazing. 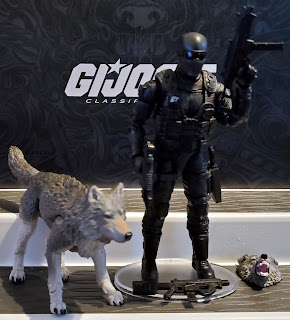 So what are you waiting for? Get you one!

Posted by The Toy Box on August 20, 2021
Email ThisBlogThis!Share to TwitterShare to FacebookShare to Pinterest
Labels: G.I. Joe Classified, Hasbro