Communards are one of those rare duos from the 80's that came and went pretty fast. In fact, many people probably don't even know who they were. I myself was included in that group. I came across them in one of those, all to many, "my favorite songs of the 80's" compilation videos on Youtube.

Their only hit, or more accurately stated as mild success, came in the form of the re-recorded Don't Leave Me This Way, which I only knew of because of the 2000 released version by Sheena Easton on her Fabulous album. However, the song was originally made popular by Harold Melvin and the Blue Notes in 1975 and then once again in 1977 by Thelma Houston.

Success would only be a millisecond blip with the duo being out of the limelight just as quickly as they were in it. The song debuted in the final week of December 1986 at number eighty-seven, and peak at number forty-six in February of the following year. However, by March of '87, the track fell off the charts, and they were essentially never heard from again.

One hit wonders? I aimed to find out as I sat down to play their self titled 1986 album. What was it the Communards added to the world of 80's music? 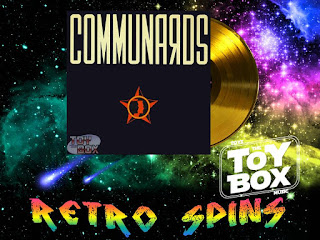 Yikes...This was bad. Really bad. I mean, really, really bad. Maybe one of, if not the worst, 80's albums I've heard.

I've heard bad albums before, but this was literally diarrhea in my ears. The falsetto sounds reverberating from singer Jimmy Sommerville felt like they could be used to torture people with. I'm serious. Blindfold them, lock them in a dark room and blare this album throughout the place. They'll be telling you anything you want to know in no time.

I always try to push myself through an entire album for my Retro Spin posts, but I just couldn't do it. By song three I was done. At a minimum I started each song to see if things got better, but as I heard the same yodeling emanating with each song I quickly hit the "next" button. What's worse is this album is over an hour long! Who in their right mind could sit through this?

Yeah, I stand by what I said above. This album is a perfect torture device. Terrible in every way. Run far from anything from the Communards!

Click "HERE" to go back to the home page. For more posts related to this one, please click the labels below.
Posted by The Toy Box on August 03, 2021
Email ThisBlogThis!Share to TwitterShare to FacebookShare to Pinterest
Labels: 1986, 80's Album Review, 80's Music, 80's Music Review, Communards, Music of the 80's, Retro Spins