I woke up bright an early today for my birthday, and started it all off with a special bowl of cereal. 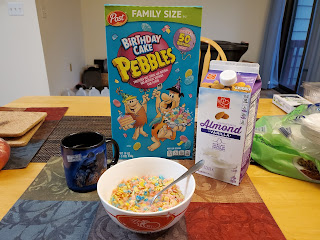 This was my very first time trying Birthday Cake Pebbles, and while they certainly had a cake flavor to them, they are also some of the sweetest cereal I've had in a long time. I almost didn't make it through the bowl.

I called my mom to wish her a happy anniversary, and she didn't answer. As of this post, she hasn't even called me back. Wow, what a major 'f' 'u. Thanks, mom.

Though I was expecting my girl early, I was surprised that she brought breakfast with her. Having just finished cereal, I was getting ready to politely decline when she made me aware of how unhappy she was already.

Turns out that she had intended on bringing me two gifts for my birthday, but somehow managed to lose the one, thinking she probably threw the box away while cleaning, and the other never arrived. To make matters worse, when she arrived at the restaurant to pick up the food, the order was apparently misplaced, and they didn't have it ready. I didn't dare tell her I had already eaten, and with a smile piled biscuits and gravy on top of my cereal.

For the day, a trip to CD Depot in College Park, Maryland was on the itinerary, and we left for this just after 10:00 AM, only to get caught in a massive rain shower that made visability and travel a headache. 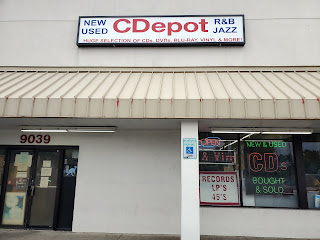 I had high hopes of finding a lot of CD's that were on my list, and in general, a few that intrigued me. However, when entering the store, this was the site I was greeted with. 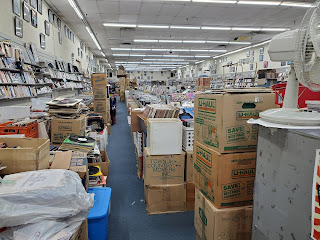 This place was a cluttered mess. Boxes and crates were piled high in front of every single section, making it difficult, frustrating, and pretty futile to even bother trying to search through the various CD bins that lined the walls and sat in the center of the store. I would hate to be anywhere near this place if a fire ever broke out.

I did manage to come away with a handful of items, three of which were on my list. However, I was hoping to find more than I did.

We were going to go to another used CD store. However, when we entered in the directions, our GPS promptly informed us of a forty minute slow down due to an accident. Rather than sit in traffic, we instead decided that we would just go another day.

My girl had been asking me for a few weeks what kind of cake I wanted for my birthday, and so far I hadn't answered her. Instead, I told her we would stop by a Mexican bakery and see what they had. 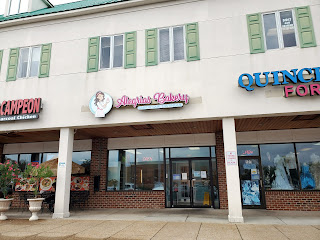 They had a pretty good selection of baked goods, and a couple cakes. 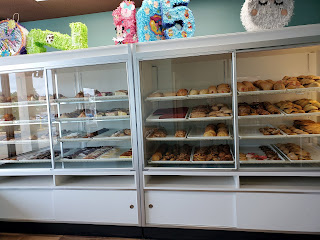 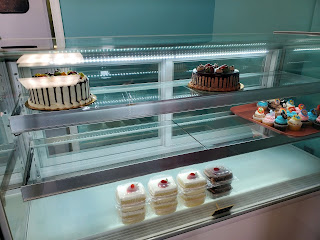 After grabbing a few things, and then dropping it off at home, the late afternoon was starting, and we decided to hit a late lunch, early dinner. For this, we dropped by Iron Age, a somewhat local Korean BBQ joint. 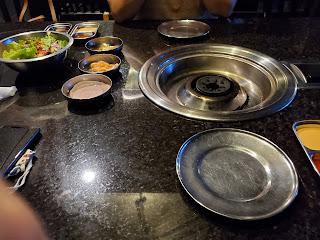 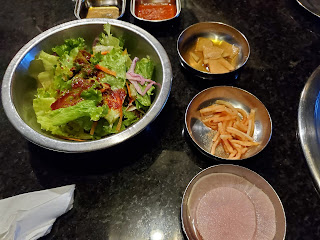 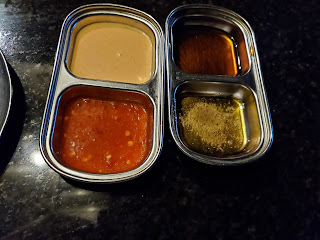 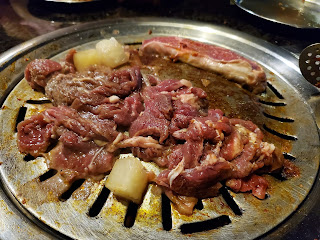 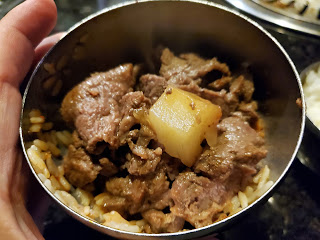 It was pretty good, and I chased it with a rum and Coke in honer of National Rum Day. 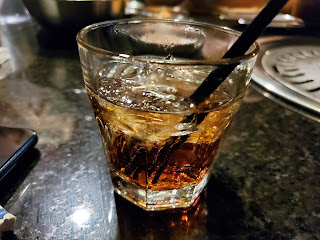 After getting home, we sat around for a bit, watched a couple things on Youtube, and eventually cut into the cake. 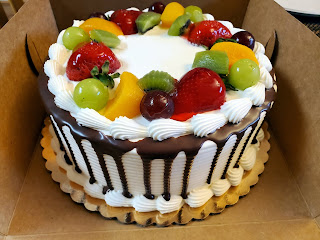 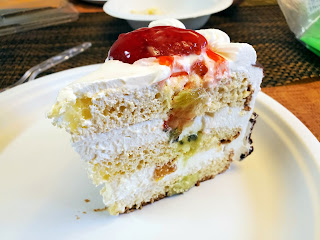 My girl continues to kick herself for her presents debacle, but overall, we woke up breathing, I'm starting a new year, and we had a day together. What more could you really need?

With that, this wraps up my birthday for another year.

Click "HERE" to go back to the home page. For more posts related to this one, please click the labels below.
Posted by The Toy Box on August 16, 2021
Email ThisBlogThis!Share to TwitterShare to FacebookShare to Pinterest