Birthday Gifts From My Brother

On July 25th, my brother sent me a simple text message. It asked, "Anything on your list for your birthday?" In response, I sent him an e-mail with a few games, CD's and a comic. At the top, I said, "Take your pick".

He initially told me that he wasn't planning on stopping by for my birthday, and I don't blame him. We're over two hours away from each other. As such, he ended up mailing me a box that arrived about a week before my birthday. If you read my post prior to this one, you saw that he actually ended up dropping by on Saturday, and off we went on a great day of nostalgic outings.

Well, during his visit, he insisted that while he was there that I open the box he sent. Even though my birthday was still a couple days away. Not wanting to be rude, and eager to do so anyway, I obliged. 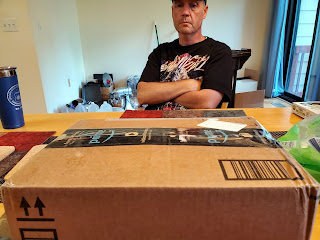 He told me the reason the box was so big was because of all the bubble wrap, and he wasn't joking. Good grief. Was this the whole role? 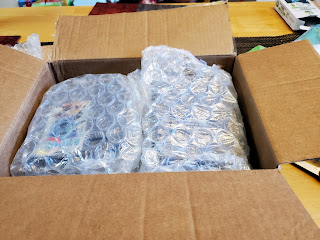 As I dug through the box, it was apparent quickly that he didn't opt to pick just one or even two items from my list. Holy crap! He bought them all! 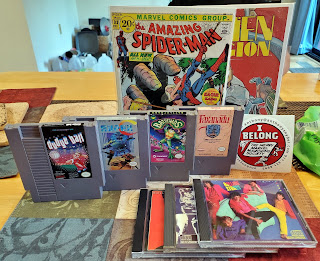 Overwhelmed, really happy, and feeling it was overly generous at the same time. 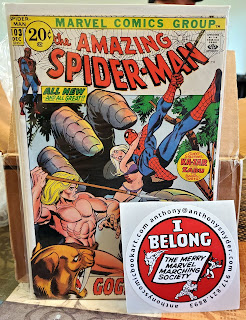 I don't need many more issues between 100 and 199 to have a full run of those issues, and number 103 was a key I've been looking at off and on for a long time. It features the first appearance of Gog. The Mighty Marvel Marching Society sticker was a freebie thrown in with his purchase, and a fun one that I'm happy to stick to my comic box. There was a second, unrelated comic, also thrown in by the seller. It's in the back of the group photo, but I honestly won't be holding on to that one.

Super Dodge Ball, Super C, Faxanadu and Battletoads have been games on my list since the day I wrote said want list. I truly mean it when I say the comic above or just one of these games would have been more than enough as a gift. To receive not only the issue, but all four of them was just shocking. I'm in awe at my brother's generosity. Don't misunderstand by any means. He's a working class Joe just like the rest of us, myself included in the pile. We all have to work very hard for our money, and this was so incredibly nice of him to be so bountiful.

He followed all of this up with the three 1980's Rolling Stones CD's I'd had on my albums list for a long time. These included, Tattoo You, Emotional Rescue and Dirty Work.

Seriously, I am so very overwhelmed by all of this. All of this is so amazing. But, you know what the best part of all was? Just being able to spend the day together. I had a blast, and I hope he did too.

If you're just now tuning in to The Toy Box for the day, make sure to check out the prior posts from today. There's also more to come, so check back later.

Posted by The Toy Box on August 16, 2021
Email ThisBlogThis!Share to TwitterShare to FacebookShare to Pinterest