What ever happened to Living Colour? They were one of those bands that kind of came and went in the blink of an eye, and people seemed to not really notice them or their general existence. They were one of the latter bands of the 80's, bringing with them a hard rock style sound which fell in line with a lot of the sounds of the 90's. As such, it's interesting that they kind of fell off the radar.

While I had always been a fan of their tracks Cult Of Personality and Glamour Boys, I never really paid much more attention to them beyond this. When I saw the CD, Vivid, hanging out at the used CD store, I felt this definitely needed to be rectified. 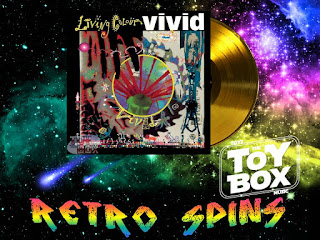 As I fired it up, I was blasted with my favorite from them, Cult Of Personality. Naturally, this set the tone for what I expected from the remainder of the album. Sadly, the delivery never came.

Vivid isn't a bad album. I didn't find myself "hating" it, but instead I kept finding myself waiting in limbo for it to deliver another track as delightful as Cult Of Personality or Glamour Boys, both of which are featured on the record. Like I said though, this never came.

The closest it got was around the three minute mark of Desperate People, but this didn't last throughout the entire song. It also didn't leave me wanting to necessarily hear the track again.

There are some notable appearances on the album. Mick Jagger provides the harmonica on Broken Hearts. While Chuck D and Flava Flav provide rapping and social commentary on Funny Vibe. However, they don't really provide any "wow" factors overall to the album.

Overall, I was pretty disappointed with Vivid. The album set a high bar with the opening track, and it just never seemed to hurdle over it from that point on. I was really hoping hearing this album would have left me wanting more from the band. I don't.

Click "HERE" to go back to the home page. For more posts related to this one, please click the labels below.
Posted by The Toy Box on August 24, 2021
Email ThisBlogThis!Share to TwitterShare to FacebookShare to Pinterest
Labels: 1988, 80's Album Review, 80's Music, 80's Music Review, Living Colour, Music of the 80's, Retro Spins, Vivid