Ah, Jay Bartlett. I was first introduced to him when catching his Amazon series, Nintendo Quest, which saw him driving around Canada and the USA in an effort to collect the entire run of Nintendo Entertainment System cartridges. He manages to pull it off in the end, long after his implemented deadline, but whatever. He crossed the finish line, and that's all that matters.

Well, Jay returns in 2021 for an all new Amazon series, Action Figure Adventure. While his intentions are commendable, intending to spend $5,000.00 on toys to host a charity auction, the audience quickly discovers that Jay thought none of this through, did zero research, and rapidly shifts his own initial strategy, only stressing the point more that there was no thought process put into his whole agenda. 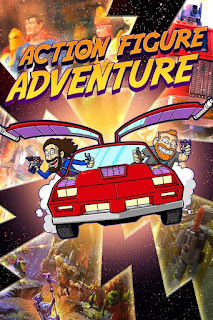 Don't get me wrong. It's fun to see all the various shops he goes to, revel in the awe inspiring sight of boxed vintage toys, and hear from passionate collectors. However, as the mouthpiece and orchestration mastermind of the whole thing, Jay only serves to show that he is the least educated among all the people he's talking to.

Jay's biggest misstep in his adventure is that he's seemingly done zero research on any of the values of the toys he's after. This results in him drastically overpaying for several items, which leaves no chance for any profit to be achieved for charity's sake. The perfect example of this is the vintage Power of the Force Yak Face, which he shells out $400.00 in store credit for, yet the figure is incomplete, having no staff included. Four hundred dollars is the high end of a complete one, so for him to pay the price he paid for incomplete cements that he's in way over his head.

Examples from there only seemingly get worse. Jay continuously talks about seeking out a complete in the box Eternia playset with a continuously shrinking $5,000.00 budget. A toy which the empty box alone can sell for $2,000.00. Then proceeds to pay $500.00 for a reproduction carded Cobra Commander.

His second major falter is that he somehow thinks that going to brick and mortar stores that specialize in secondary markets of vintage toys will give him any sort of fair deal. It's common knowledge that physical stores charge well over secondary market rates. This is because they have rents, insurance and other overhead costs to pay. You're not going to find a deal at these locations if you're essentially looking to resell. This whole plan is flawed, and quite honestly baffling as to how he even conceived that this was going to be lucrative. Buy high, sell higher? 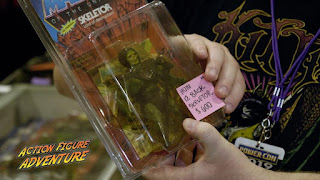 By the end of it, Jay's investment of toys does result in some profit for a few items, but also fails spectacularly in others that come in hundreds of dollars less than he paid. I winced as he paid $1,150.00 for an 85% complete USS Flagg. On a good day, a 100% complete aircraft carrier would cost around $1,200.00, but again, these things only serve to show the audience that Jay is so far out of his league in terms of knowledge of what he's actually looking at.

Probably the worst part of this is that any seasoned collector will get the sense that these dealers know they're charging him top dollar, and are fully aware that at these prices his charity auctions are doomed to make any profit. None of them are willing to contribute to the event by way of making donations. Instead, they take a laughable reduction on their cost. Seriously, the guy selling the shown six hundred dollar Skeletor said he would take ten dollars off the price as "his" contribution to the cause.

This failure is compounded all the more by the timing of Jay's online auction, during the midst of a global pandemic. While the world couldn't have contemplated or anticipated the impact Covid-19 would have overall, one thing was apparent from the start. Livelihoods were going to be impacted in a way not seen in a long time. During a time period where many people across the world were wondering if they would even have a job tomorrow, offloading toys became a must. While prices did increase slightly on some items, the other side to this was that a lot of stuff was available from many people downsizing on toys just to pay bills. Necessities were taking priority to frivolous desires.

As noble as Jay's intentions were, world circumstances, and a general lack of knowledge that led him to over pay for pretty much everything he bought left little to no room for success. With that said, the documentary is still very much worth watching. It has entertainment value in several aspects, and again, Jay's intentions are to be commended. 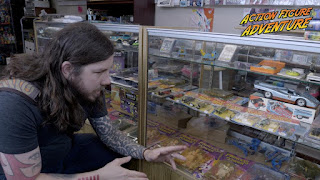 But how could this have been a more successful venture? How could his intentions also have resulted in major returns for charity? Well, for starters, his approach of buying everything he was auctioning was his biggest falter. Ideally, when one looks to maximize a charity contribution, they do so through donations. Not by walking into a store and paying for all the items out of pocket, and certainly not a collectible specialty shop that charges the high end of prices.

While this would have required a lot more effort and networking, and probably none of these brick and mortar stores, I'm sure there would have been someone somewhere who would have come forward to help. Heck, I would have donated my two carded COPS figures, Big Boss and Bullet Proof. Donations are after all a tax deductible item, but obviously the biggest pro is that it's all 100% profit to the organization.

Secondly, even if he was going to resort to buying these items, he should have advertised what he was looking for, what he was doing, and essentially clued people into the end game. This way he could have gone to direct sellers who were looking to offload things from their own collections, again, skipping the top dollar settings of brick and mortar stores. This would have also given him more room to negotiate, which again leads to higher profit to the organization he's collecting for.

It all unfortunately comes down to price. He paid too much for things, in a lot of cases, overpaying. You simply cannot flip things in that scenario, and make any profit. But, hopefully Jay learned from this experience, and if he decides to pursue something like this again in the future that he approaches it from a more cohesive direction.

Again, I want to stress that Jay's intentions were noble. I don't want to overshadow those in any respect. What he did was admirable. The execution was just unprecedentedly thought out, and poorly implemented to maximize any form of profit for charity.

Posted by The Toy Box on August 21, 2021
Email ThisBlogThis!Share to TwitterShare to FacebookShare to Pinterest