After subjecting myself to that which is known as Communards, I had to take the easy route to something I knew would be fantastic.

I'm no stranger to Def Leppard, having a few of their albums at my disposal. However, at the same time, I'm no mega fan. I couldn't honestly tell you who any of the band members are. What I could tell you though, is Hysteria is a solid album! Probably their best. Nay, it is their best album, and the albums selling of over twenty-five millions, making it their best to date, proves it. 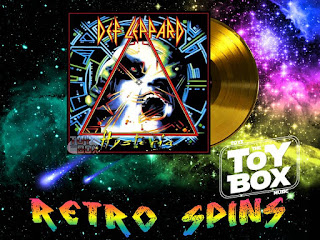 I think what makes the album such a masterpiece is the amount of time put into it. While you could say it was plagued by delays which continued to hinder the project, I would argue those delays were essential in producing the album into what it was. Issues such as losing their original producer, Mutt Lange, who later returned to the project. Recording sessions which the band were unhappy with, and later scraped. Even the tragedy of drummer, Rick Allen (thanks Wikipedia) losing his arm. All of this was essential to Hysteria becoming Hysteria.

Featuring the amazing hits, Women, Rocket, Animal, Love Bites, Pour Some Sugar On Me, Armageddon It and Hysteria, the album leaves little to complain about. Mind you, those were just the singles released. My personal favorite Run Riot and noteworthy tracks Gods Of War and Excitable are also on the album.

Honestly, I could sit here all day telling you over and over how fantastic this album is, but instead I'll leave it with a strong recommendation that you instead just go listen to it. I'm sure, even if you don't own it, there's somewhere on the web you can play it - such as Youtube.

Click "HERE" to go back to the home page. For more posts related to this one, please click the labels below.
Posted by The Toy Box on August 10, 2021
Email ThisBlogThis!Share to TwitterShare to FacebookShare to Pinterest
Labels: 1987, 80's Album Review, 80's Music, 80's Music Review, Def Leppars, Hysteria, Music of the 80's, Retro Spins