Just when you thought Joe and Katherine Jackson had run out of children to churn through the music wheel, along comes oldest child, Rebbie! The last of the Jackson kids to release an album, but perhaps maybe the smartest considering the instant name recognition which would be allotted to her. 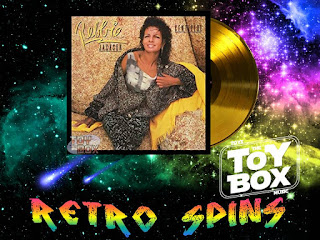 The title track, Centipede, was written and produced by Michael Jackson, and consequently was the reason the album was certified gold based on the song selling millions of copies. However, Michael wasn't the only brother to be found skulking around the recording studio lending a hand. Tito, Jackie, Marlon and Randy are all here with writing credits. Even Prince gets a credit on the album for Rebbie's cover of his track, I Feel For You. It's not as good as Chaka Khan's version, but it is closer to the original which Prince released on his 1979 self titled album.

In fact, as a whole, the album isn't really that good. Centipede (the song) definitely stands out as the best track, and truth be told, I Feel For You is probably the second best. The rest of the tracks just fall sort of flat. Forgettable in every way. Even her cover of Fork In The Road pales in comparison to that of the original from Smokey Robinson and the Miracles.

I give Rebbie kudos for trying, but at the same time I also have to snub her a bit. Why? Because she clearly didn't have to work for the opportunity, nor was her material all that amazing. I don't honestly think "the industry" would have given her a second glance had she not had the name recognition backing her. She has a decent voice, but the majority of the album is simply boring.

If you're a fan of The Jacksons, and absolutely feel like your collection won't be complete without this album, then by all means, this one is for you. However, if you're just looking for a solid album, then pass this one up.

Click "HERE" to go back to the home page. For more posts related to this one, please click the labels below.
Posted by The Toy Box on August 17, 2021
Email ThisBlogThis!Share to TwitterShare to FacebookShare to Pinterest
Labels: 1984, 80's Album Review, 80's Music, 80's Music Review, Centipede, Music of the 80's, Rebbie Jackson, Retro Spins