If you enjoyed last week's history of ever revolving band members that were Fleetwood Mac, then you may also enjoy today's look at the original lineup of Genesis through its final album. Though it's not as massive as that of Mac, it's seen its fare share of iterations before becoming the classic lineup of Phil Collins, Mike Rutherford, and Tony Banks.

Genesis began when God spoke, but as for the band, they began at Charterhouse School in Godalming, Surrey. It was formed by Mike Rutherford, Peter Gabriel, and Anthony Phillips. The name came from pupil Jonathan King, who arranged for them to record their first tracks.

Featuring Peter Gabriel on Vocals, Tony Banks on keyboards, Anthony Phillips on guitar, Mike Rutherford on bass, and John Silver on drums, the band released their 1969 debut, From Genesis To Revelation. However, it's worth noting that Silver was not actually the first drummer for the group. He replaced Chris Stewart just before the album was recorded.

Silver departed after the recording of their debut album to study at Cornell University, and was replaced by John Mayhew for their follow up album, Trespass, released in 1970. Both Anthony Phillips and John Mayhew would exit prior to the recording of 1971's Nursery Crimes, and were replaced by Steve Hackett on guitar, and Phil Collins on drums. Though I was unable to find any information on why Mayhew was dismissed from the group, Phillips departed due to stage fright, and a lack of scope for solos.

The lineup of Gabriel, Hackett, Rutherford, Banks, and Collins would remain in place through 1974's The Lamb Lies Down On Broadway. Following weeks of speculation, Peter Gabriel would leave Genesis in 1975, launching a highly successful solo career. Phil Collins would fill double duties, assuming the role of vocals, while remaining the drummer.

Steve Hackett would leave the group after the 1976, stating he, "needed autonomy". For those of you without a dictionary handy, essentially he wanted independence and freedom to do what he wanted. The result was the aptly titled, "...And Then There Were Three..." album released in 1977. This would feature the most popular lineup of the group, Mike Rutherford, Tony Banks, and Phil Collins.

Though they continued to record in a progressive rock style, things turned commercially successful for Genesis in 1981, when they focused on and released the pop oriented Abacab. This sound, and subsequent success would continue in tandem with Collins own solo success, and Genesis' final album, We Can't Dance in 1991.

However, by 1993, amidst a massive world tour, Collins felt the band couldn't reach any higher than it already had. Rather than continue to try, he opted to step back, focusing on his solo work again. Specifically, to create music which meant more to him personally. He announced his departure from Genesis, releasing his solo album, Both Sides, that same year.

Rutherford and Banks hired Ray Wilson as their vocalist for 1997's Calling All Stations. The album was poorly received, and remains their last studio record to date. Since 2006, Rutherford, Collins, and Banks have reunited for tours, and additional touring scheduled for 2021, while initially postponed, appears to be back on track. 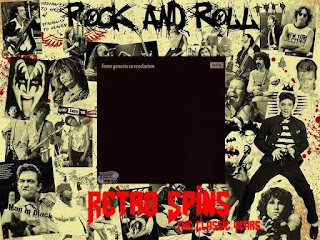 Which leads us to today's Retro Spin, where we go all the way back to 1969 to fire up the debut album of Genesis, From Genesis To Revelation. Right from the start, I pick up on a folksy sound, reminiscent to that of Simon and Garfunkel. I don't necessarily hate it, but I also know this particular style of music doesn't usually resonate with me, in terms of "hit songs".

This initial reaction turned out to be true, as I ultimately didn't walk away with anything new for my shuffle list. From Genesis To Revelation wasn't a bad album. However, what it lacked was any kind of punch. I didn't hear anything that left me wanting to hear it again, and further, I don't even remember any one specific song at all. It was just there. Noise, if you will. Not bad noise, but noise all the same.

With that said, I somewhat expected this. I had tried listening to some of the Gabriel led Genesis stuff in the past, and none of it was really for me. Take that for what it's worth though. My introduction to them was the 80's pop smash hits that dominated the airwaves throughout that decade. I don't remember when I learned that Gabriel was the original front man for the band, but I do recall the shock from hearing it. At the time, I couldn't fathom it. The Sledgehammer guy? Really?

I suppose, just like Fleetwood Mac, sometimes change is necessary to really launch a group from minor success to superstardom. I think this is definitely what happened when Collins took control of Genesis, leading them to a more radio friendly sound, which ultimately resulted in the massive success. For me, Genesis of the 80's is more my speed, but I respect the trials, tribulations, and changes which had to occur to get them to where they are today. For without Gabriel and his folksy sound, there would have never been Collins, Rutherford, Banks, or any of the many hits that have become some of my favorites to this day.

Disclaimer: They Toy Box does not endorse or contribute to piracy. Retro Spins posts are intended for educational and entertainment purposes only. None of the music discussed here is available for sale, downloading or distribution.
Posted by The Toy Box on August 04, 2021
Email ThisBlogThis!Share to TwitterShare to FacebookShare to Pinterest
Labels: 1969, 60's Album Review, 60's Music, 60's Music Review, From Genesis To Revelation, Genesis, Music of the 60's, Retro Spins