My history with Billy Joel starts around 1983, or as I like to call them, The Christie Brinkley Years. Though Uptown Girl was a frequent video on MTV, the impact for me personally was pretty limited. His follow up album, The Bridge was nowhere near my radar. This is interesting in retrospect, as it features, Modern Woman, one of the tunes from the Ruthless People soundtrack.

Billy Joel would swing back around to me in 1989 with his album Storm Front for two reasons. The first, the song, We Didn't Start The Fire. The second, because my brother got his hands on the cassette, and wouldn't stop playing it. Joel seemed to disappear from that point on, but reappeared in 1993 with his powerhouse hit, River Of Dreams. He would disappear again thereafter, and return briefly in 2001 for his last studio album to date.

Despite this lack of studio albums, he's remained fairly active in the touring scene, which I suppose isn't a bad way to do it. When you've passed your prime, in terms of selling albums, there's no shame in making money that people still want to hear you sing from your catalog.

But so far, this post has only encompassed his pop success and eventual bowing out of the studio life. Where did it all start?

According to his own words, Billy Joel wanted to be a song writer, not a rock star. When he conceived the material for his first album, Cold Spring Harbor, he envisioned the music being for other artists. This changed when he received the advice that if he wanted people to hear his music he needed to cut an album, and then go on tour to promote it.

Though his debut album would be mildly successful in Japan and the U.K., his performance of Captain Jack live on a radio show would be what garnered the attention of Columbia Records. Shifting labels, which of course lead to the usual slew of legal battles with his prior label, Joel would release, Piano Man in 1973. The album serves as his public breakthrough album, drawing in many fans.

Joel would follow this album up with 1974's Streetlife Serenade, and 1976's Turnstiles. However, it wouldn't be until 1977's The Stranger that he would finally achieve a critical and commercial breakthrough.

Despite this success, and an additional album, 1978's 52nd Street, the artist was still missing one major piece of success. Enter 1980's Glass Houses. Though it featured several singles, the stand out track, It's Still Rock And Roll To Me, would soar up the charts, becoming his first number one song. This album was followed up with 1982's The Nylon Curtain.

Welcome back to 1983's An Innocent Man. With massive radio and MTV friendly hits filling it from front to back, it would be, Tell Her About It, that would become Joel's second number one hit. This album then comes full circle back to where it started. My history with Billy Joel starts around 1983...

However, before I dig into today's Retro Spins, I'll close the loop on his number one hits. As you may recall reading, I said he's had three. That final one was the lead track from Storm Front, We Didn't Start The Fire. 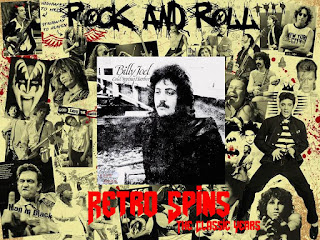 With all of that summed up, here we are with today's Retro Spins. A look and listen to Billy Joel's 1971 debut, Cold Spring Harbor.

First and foremost, it's fair for me to state up front that while I like some of his music, I am by no means a Billy Joel fan. His iconic hits, such as, Piano Man, Allentown, You May Be Right, and all the others that encompass his greatest hits albums, are decent songs, but not necessarily something I make an effort to listen to. For the most part, it's before my time, and not within the sweet spot era I typically hand around in, music wise.

It became apparently quickly that his debut wasn't going to be up my alley with the opening track being a vocal and piano piece. It rang true with the "boring" sense I get from a lot of his music, and it stayed this way for the entire play through. By the end of it, I couldn't even tell you what any of the ten tracks on the album were. Nothing stood out to me.

I will give the album credit for being mellow and calming, but it's also not very entertaining. It was just background noise.

The irony to all of this, is that if I were to look at my Billy Joel music collection, which I will, the reality of despite me not being a big fan, I actually have ten of his thirteen studio albums. The only one's I'm missing are this debut album, Streetlife Serenade and Fantasies & Delusions. The completest in me says I should buy them to, "finish the set", but the reality side of me screams, "stop buying crap I don't want!" Maybe if I find them in a dollar bin, but I'm certainly not going to actively track them down.

Disclaimer: They Toy Box does not endorse or contribute to piracy. Retro Spins posts are intended for educational and entertainment purposes only. None of the music discussed here is available for sale, downloading or distribution.
Posted by The Toy Box on August 18, 2021
Email ThisBlogThis!Share to TwitterShare to FacebookShare to Pinterest
Labels: 1971, 70's Album Review, 70's Music, 70's Music Review, Billy Joel, Cold Spring Harbor, Music of the 70's, Retro Spins