Though it wouldn't be until the 80's that "New Wave" would become a popular term for music, the concept of this musical category was around as early as the 70's, and The B-52's, while debuting in 1979, fell among that classification. But what exactly is New Wave?

Truth be told, it was a category created to be a catch all for music that didn't necessarily fall into one. The "New Wave" term is regarded as so loose and wide-ranging as to be "virtually meaningless", according to the New Rolling Stone Encyclopedia of Rock. For me, it simply means music that was unique, or sometimes cutting edge in terms of shaping a generation.

The B-52's definitely fall into the definition of the word unique. They sounded different, they were kind of weird, were they a joke? Or were they being serious? Who knows. Kitschy in all manners of the word. They were the kind of music teens could relate to, but light enough that even your mom would listen to them. 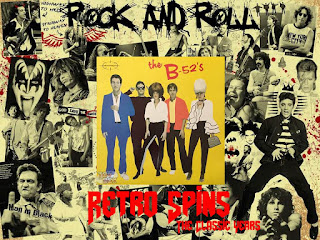 Their self titled debut, though mildly successful at the time, would ultimately serve as the ground work for their future success, boosted all the more by consistent rotation on MTV. However, what I myself found myself feeling with their album was a sense of uniqueness and fun that soon wore thin, bordering on annoying. The music wears thin fast.

I personally bought this album for Rock Lobster, and really, that's all I walked away with. Mind you, even that's not a song I would actively throw on just to hear. But if you caught me in the right mood of a random shuffle, I may or may not skip it.

They remind me a lot of Weird Al Yankovic, which is odd, because they certainly aren't a parody band. Still, this definitely the vibe I get from them. Not a bad thing, but not something I necessarily would want to hear everyday. I don't think I would go to any great lengths, or necessarily have any interest in tracking down any other albums. Well, beyond their 1989 Cosmic Thing Album (for Love Shack and Roam), which I already have.