Retro Spins: The Doors - The Doors

Ah, The Doors. Them's those chaps what was in that Oliver Stone movie starring Iceman from Top Gun and Sally. That's about all I knew about them, with exception of the hits which have transcended the decades.

The Doors are one of those bands who I collected the majority of their discography before even getting around to firing one up. I've collected their entire studio works from their debut album through 1971's L.A. Woman, which is the last album to feature Jim Morrison, but not the last in the band's catalog. Due to their positive critical reception, I may have to get 1971's Other Voices and 1972's Full Circle. 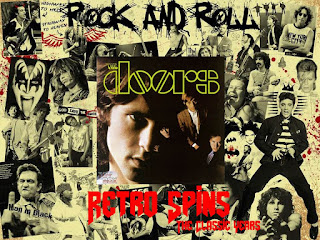 For now though, let me dive into the band's self titled debut album. Like I mentioned above, with exception of the hits and Stone movie, I know little to nothing about the band. So this is relatively all new territory for me.

The album starts with the hit, Break On Thru (To The Other Side), and this set the bar way high for the rest of the album to achieve to. As the songs continued on, I admittedly found myself very surprised. They were indeed meeting this expectation. It was also at this time that I realized the item was on shuffle, and with exception of the first song, the others were not playing in sequence. It was disappointing to realize I wasn't getting the experience as the band originally intended, order wise, but still, the music was good.

As I continued my play through, it was great to hear additional Doors staples, Light My Fire and The End. These helped to only more so impact how great the album was. And yes, I suppose by the end of it, I was a new inductee into The Door's fandom. Well, maybe not fan, but intrigued and entertained enough to want to check out the next album. That's something I'm definitely looking forward to.

While the hits definitely stood out on the album, more so for their timeless rotation on radio stations than anything else, I didn't hear any songs that I would classify as "bad" - Even in shuffle mode. The Crystal Ship, Alabama Girl (Whisky Bar), and Take It As It Comes were three stand out tracks that I felt could have easily been top singles from the band.

That's going to be it for me on this one.