Fans of 80's music remember Sly Fox for their ten ten hit, Let's Go All The Way, while fans of video games recognize the aforementioned song from the launch trailer of Grand Theft Auto V. Perhaps if you're a fan of both, such as I am, you not only recognize it from the 80's, and got a little excited when you heard it for the launch trailer.

Sly Fox came and went in the blink of an eye in 1985 with their album, which also happens to be titled, Let's Go All The Way. The duo consisted of Gary "Mudbone" Cooper and Michael Camacho, and were presented as a wholesome, clean-living pair of idols. An image which clearly didn't work one way or the other for them.

Let's Go All The Way has been on my list of wants for quite some time, but with CD copies being few and far between, and none to cheap, I finally settled on picking a copy on vinyl. However, I'm still keeping the CD on the back burner of one I'd like to grab if the opportunity presents itself. 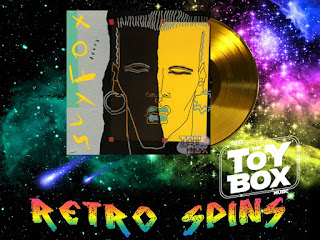 After that (what seems like a) long wait of purchasing online and delivery, I was finally able to get my first taste of this full album. With Let's Go All The Way blasting out of the gate as track one, the bar got set pretty darn high right off the bat. Sadly, like a balloon farting across the room as it deflates rapidly, so to did this album.

The remaining seven tracks just don't have the punch behind them that Let's Go All The Way, the song, has. In fact, they're pretty awful. As if this track was written by someone completely different from the person who wrote the remaining songs - Despite the album liner notes crediting "Mudbone" to it.

Seriously, what happened here? How are you going to have a top ten hit, and then follow it up with seven tracks in a row of barely listenable songs? It was really, really bad. So bad, I just don't even know what to say at this point. I actually ended up turning it off after listening to a few seconds of each song because I just couldn't take it anymore.

Not only did listening to this album make me no longer want the CD, but it also dampened my enjoyment of the song which put them on my radar to begin with. I just can't believe it could be associated to these two.

Click "HERE" to go back to the home page. For more posts related to this one, please click the labels below.
Posted by The Toy Box on March 30, 2021
Email ThisBlogThis!Share to TwitterShare to FacebookShare to Pinterest
Labels: 1985, 80's Album Review, 80's Music, 80's Music Review, Let's Go All The Way, Music of the 80's, Retro Spins, Sly Fox