Zach Snyder's Justice League was the reason I signed up for HBOMax when it first launched. Since then, while I have enjoyed a lot of content from the streaming service, I waited, and waited for the film to finally drop. Well, this Thursday was that day.

At roughly three and a half hours, this is a massive movie, and one that on the surface appears to take its time unfolding so that you get a full and rich story. However, if you're like me, and can't necessarily spend that chunk of time watching a movie, it is conveniently broken up into six parts, each one denoted as such with its own subtitle.

Today, I'll be taking a spoiler(ish) look at Part I: Don't Count On It, Batman. Before I do, it is worth noting that I never saw the Snyder / Whedon cut of the original theatrical film. I didn't bother, because since the day it came out, it got bombarded with negative reviews. With DC's, at the time, trend of so many misses vs. successes, I was disenfranchised with their attempt at building a film universe. As such, this will be a viewing from a one hundred percent fresh perspective. 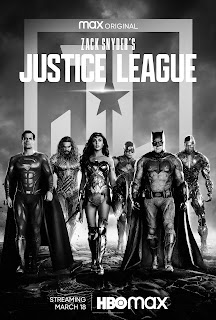 The film starts out recapping the final battle of Superman's life, and more specifically as he's yelling in agony. The shout spreads across the Earth, breaking open the mother boxes under the watch and protection of the Amazonian, Atlantian and Cyborg. We also catch a glimpse of Lex Luthor, who give a sinister smile as if everything is unfolding as he expected. All the boxes react to this, and the one under watch in Themyscira becomes a focal point of interest as it cracks open.

From there, we're advance in time and are taken across the globe to Amnesty Bay, where Bruce Wayne is on a quest to build a team. He's doing this because of his premonitions of an upcoming war. Ultiamtely, Aquaman turns him down, but it's a fun scene that showcases the multiple levels of skills that Bruce Wayne has at his disposal - From tracking, to speaking languages nobody would suspect him of understanding, and his endless resource of money. Okay, that last one isn't a skill, rather a resources.

We then shift again to the Europe where a group of terrorists storm a building full of children on a field trip with the intentions of blowing it up and killing everyone inside. They claim to want nothing more than to return the world to the dark ages, and they seem to think blowing up four city blocks will do just that. Though the action scenes with Wonder Woman destroying them is exciting, it's a bit silly in retrospect to think that this small terrorist group would think blowing up such a small section of a city would be sufficient enough to revert the entire globe back to the dark ages.

Now we head to Metropolis, where we spend a brief few minutes with Lois Lane, who is visiting a memorial site for Superman. The camera makes sure to focus in on the engagement ring adorned on her finger.

The remainder of part one takes place in Themyscira, returning us back to the cracked mother box under guard. Steppenwolf appears suddenly with an army, and the war for the box explodes. Though they fight valiantly, in the end the Amazonian fighters are no match for the power of the villain, and he escapes with the box in hand. The battle itself is devastating to the women who lose several sisters as a result, and it is very apparent that Queen Hippolyta feels each loss personally. The chapter ends in defeat, but with the Queen informing her soldiers to light the signals.

Overall it was a very exciting chapter, and a great start of the film. As I said above, it was a little silly that the terrorists felt their minimal explosion would have such world changing results, and I also thought that sections with CGI, such as Cyborg's face, and some of the groups of Amazonian women very much so looked fake. These moments didn't throw me out of the film, but definitely stood out as out of place. I was thoroughly invested after just thirty minutes, and I am very much so chomping at the bit to jump into chapter two, which I think I'm going to do as soon as I wrap this post up.

It is difficult to choose one specific scene that stood out as the best, because really each section stood on its own, and brought with it something either fun or interesting to watch (or both). I really have to say that chapter one was solid. Hopefully, the remainder of the film can meet the expectations of the high bar set with the film's intro.

Posted by The Toy Box on March 20, 2021
Email ThisBlogThis!Share to TwitterShare to FacebookShare to Pinterest
Labels: Zach Snyder's Justice League