Before ABBA took the world by storm, Middle Of The Road was the face of Europop. Lead by singer, Sally Carr, the group was well known for its harmonies, and best selling singles, Chirpy Chirpy Cheep Cheep, Sacramento, Tweedle Dee Tweedle Dum and Soley Soley. They were so popular, that by 1972, just a year after debuting, they had already sold over five million albums.

Unfortunately, for this Scottish pop group, their popularity stayed more so confined to Europe and Latin America. My exposure came originally from Top Of The Pops albums where singer, Tina Charles, covered their song, Chirpy Chirpy Cheep Cheep. In fact, it wouldn't be until decades later that I would actually discover the origins of the song, let alone the group behind it. But I'm glad I did. 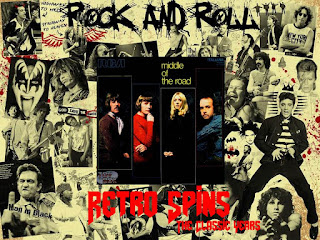 Today, I'm spinning their 1971 self titled debut album, and let me tell you, it's an unexpected treat. The harmonies noted above aren't an exaggeration by any means. Sally Carr's vocals, while stand out as the lead singer, don't overshadow the fantastic backing vocals of drummer Ken Andrew, guitarist Ian McCredie and bassist Eric McCredie.

Hearing this album really amped me up to hear more from the group, and I actually jumped right into their second album, Acceleration. However, that's a post for another time. For now, I'm really digging the sounds of Middle Of The Road, and I highly recommend you check them out. Especially if you're a fan of ABBA. I think if you are that you'll definitely find stuff you like.