Remember back in the day when upcoming writer / artist Todd McFarlane co-owned a comic shop in Puyallup, Washington? No?

That's no surprise. Many people don't.

Though the store has since moved locations, and unfortunately closed down, The Spider's Web was a comic shop located in a small strip mall at  729 River Road. While these days it's an all you can eat sushi location, back in the 80's and early 90's, this location was the place to go not only for comics, but autographs from the soon to be megastar of the comic book industry.

Todd frequently made appearances at the shop, signing books for fans directly or for the store to put on shelves and sell later. Though he signed several books, the ones most notable for being sold in the the shop were the green and silver covers of 1990's Spider-Man number one.

In an era pre professional comic book graders and signature authentication, people had to rely on the reputation of the seller to guarantee a signature was legitimate. However, for those looking for an added layer of trust, The Spider's Web slapped tiny red web stamps on the back of each book that McFarlane signed for them. With this, they included a little COA of their own. 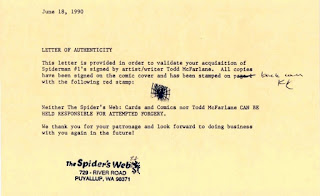 Being an age with no internet, this relatively unknown store, and its affiliation to McFarlane was left to the advertisements that were slapped on store windows and / or word of mouth of his pending appearance. So basically, word didn't spread far. As time went by, these books fell off the radar for many collectors, if they were ever on them to begin with, and have become an urban legend unto themself.

Looking at the old signatures of McFarlane, many fans immediately write them off as forgeries, and poor ones at that. 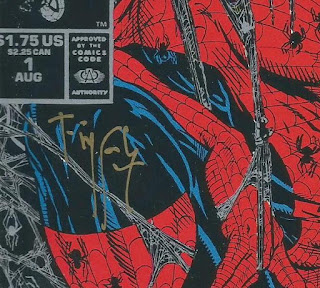 However, little do these folks know, they are not only very much so legit, but flipping the book over would reveal the stamp to back it up. Hopefully. More on that below. 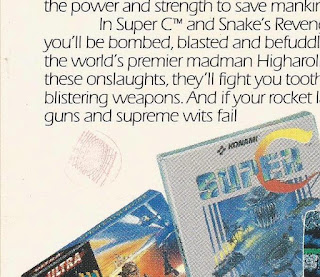 McFarlane signed both the green and silver versions of his million copy seller, Spider-Man number one, signing the green cover version in silver pen and the silver covers with gold. 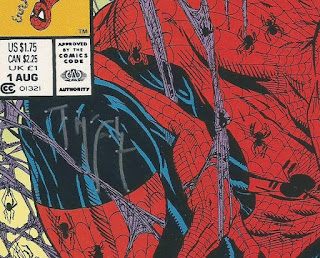 There was however a caveat to this. The store only web stamped the back of comics they sold directly. Customers who came in with their own book to be signed when McFarlane was present didn't receive this or a COA. Coupled with the relatively unknown signature style, and you can see how many fans would call ones without this fake - even to this day. Meaning if you're going to try and sell this book as an authentic Todd McFarlane signature, you're going to have more luck with the stamp, COA and history of how it came to be in existence.

It's unknown how many copies McFarlane signed, but if you look hard enough, you can find them in the wild. CGC acknowledges their existence, and there are a few graded copies here and there. Neither the green or silver seems more common or rare than the other, and they both sell within the range of fifty to ninety dollars. However, many of these don't have the COA, and this price range is only reflective of raw books, not graded. It's also worth noting that the second print gold cover was not signed / sold during this time, so you won't find ones with the stamp on them - Not legit ones anyway. 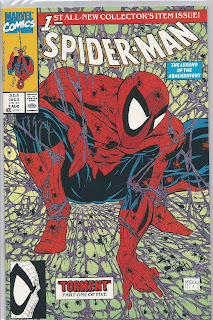 The green cover he signed was the opened polybagged direct edition with purple webs. The silver was the price printed direct edition, which did not come polybagged. It would be interesting to see if any of the blue lizard error printings were among any of the silver cover versions signed. 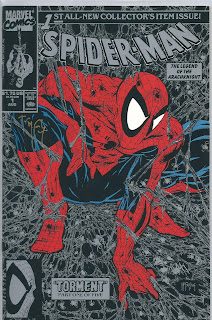 I don't know what it is about Spider-Man number one. I know the book sold over a million copies, yet I always want to pick them all up when I see them. I don't, because they aren't cheap, but I certainly have enough copies of it in various different versions. I would honestly buy a long box of this issue if the price was right.

Posted by The Toy Box on March 22, 2021
Email ThisBlogThis!Share to TwitterShare to FacebookShare to Pinterest