Don't you love it when coincidences occur? Such is the case with today's Retro Spin.

As I began reading into the history of Apollo 100, I learned of accomplished arranger, Tom Parker. He was the man responsible for most of the success from the Young Blood catalog, such as the hit, Chirpy Chirpy Cheep Cheep. For those of you who remember last week's Retro Spin, I talked about that song from the band, Middle Of The Road. Reading this news brought a smile to my face, as I was literally on the heels of listening to their debut album.

But let's not get too sidetracked here. 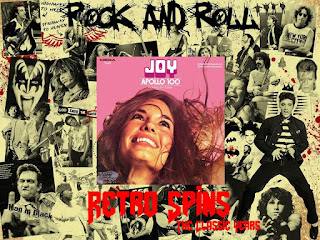 Apollo 100 was a brief iteration of Parker's which featured mostly studio musicians. They focused mainly on recording revisions of classical tunes, such as their most popular song, Joy, a rendering of Jesu, Joy Of Man's Desiring. Though many people may not recognize it in title, I'm sure if they heard it they would immediately know what it was.

Being all instrumental, their albums aren't known for having top ten pop hits. However, they certainly are unique, and perhaps even relaxing. A nice change of pace, if you will. They're the type of group you would throw their most noteworthy song, Joy, onto a mix tape for something fun, but beyond that, really have to appreciate their source material and style of music to really want to hear frequently. At least that's how I feel about them.

It's becuase of this, I won't say whether or not it's good or bad. It's just different. If nothing else, it was worth hearing.