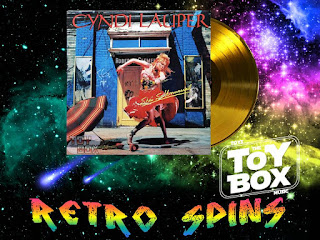 She's So Unusual came out at a pique time in my life. I was just old enough to be forming my own roots in modern music, and expanding my own tastes in what would become a lifetime fascination with 80's music. Among those artists who shaped the soundtrack to my life was Cyndi Lauper. Her album, She's So Unusual, is crafted masterfully, and while it may not have ten back to back "amazing" tracks, it's so memorable for the era in time in which it is stamped.

It features five amazing hits from Lauper, such as, Money Changes Everything, Girls Just Want To Have Fun, Time After Time, She Bop and All Through The Night. When half of the album hits that hard, it's difficult to find fault in it as a whole when it's already delivered so much.

That said, for as much of a Prince fan as I am, I can't stand her cover of When You Were Mine. She absolutely butchers that song. Straight up kills it. Why did Prince let her do that? Okay, I suppose the sixteen million copies the album sold probably padded his bank account nicely.

For me, Cyndi Lauper hit that same brick wall much like many artists before and after her. For a debut album, her achievements were so high that the only way to go from there was down. Despite having hits after this album, they got fewer and further between, and eventually she just kind of faded into obscurity.

Click "HERE" to go back to the home page. For more posts related to this one, please click the labels below.
Posted by The Toy Box on March 16, 2021
Email ThisBlogThis!Share to TwitterShare to FacebookShare to Pinterest
Labels: 1983, 80's Album Review, 80's Music, 80's Music Review, Cyndi Lauper, Music of the 80's, Retro Spins, She's So Unusual