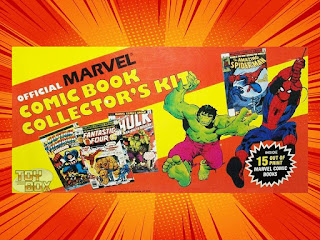 It was the beginning of an obsession, the start of a collection which would grow for another twenty years and a beacon in the distance calling to a potential future.

I had never owned comic books before, nor showed much of an interest in them. After all, I wasn't exactly a child who enjoyed reading. While I wish I could say this all changed the day I received the above box, the truth of the matter is, even though I soon got bitten by the comic book bug, it was more so the art which continued to draw me in. No pun intended. As a matter of fact, I didn't honestly read all that many of the comic books I owned, and I had thousands by the time I called it quits. 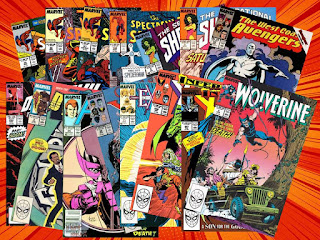 As with most collections, this process started slowly, and if it wasn't obvious, it was with this box. The Official Marvel Comic Book Collector's Kit from Collector's Marketing Corp. Inside the package was fifteen Marvel Comics comic books from 1989. While I didn't know for certain or not, these may or may not have been random, versus each one containing the same books.

It's been so long since I've owned my original Collector's Kit that I don't honestly know if the set I obtained as an adult collector is the same as that one, again, in terms of the books. I honestly want to say it's similar, but not exact. As I thumb through the comics, some of the covers start to bring back memories, while others, I swear I've never seen before. Further, a search of similar books from this same year turns up familiar covers for books I would testify under oath were in my original set.

The image above and to the right, shows the comics which came in the kit I obtained recently.

Because this was intended to be an introductory for new collectors, the Official Marvel Comic Collector's Kit doesn't stop at just the books. It also includes a (somewhat) sturdy comic box, decked out with classic characters.

Though you can't see it in the photo, Hulk adorns both the left and right sides. Atop, or on the lid as it were, are The Fantastic Four. The back of the box is reserved for the same image as shown above. 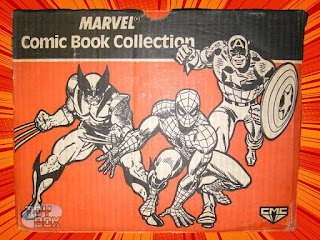 It was actually this particular piece that led me back to the kit. I wanted the box to store my current, very small, collection of comics in.

To be honest, I didn't remember the complete kit at first. However, as I began researching it, and eventually found one, it was screamingly obvious to me that I had at one point in my life owned this entire kit. Not just the box with a handful of random comics. At first, I bought just the box. However, it kept nagging at the back of my mind, eventually leading me to track down the one and only set I could find on ebay.

Price wise, it was definitely more than I really wanted to pay. Overall it was in great, 100% complete condition, but based on the comics inside, there was honestly very little physical value. However, the problem was I simply couldn't let it go. The sentimental value to it was nagging at me constantly. After days of clicking on the link, looking at the pictures, frowning at the price and closing the link, I finally just had to have it.

But I digress. There's still more in the set than just my memories. 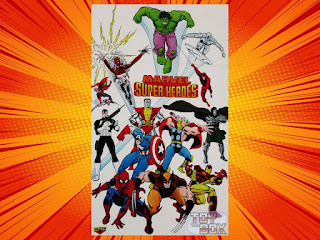 Also included in the kit was a fantastic poster featuring multiple characters. While I had forgotten where I originally gotten it from, this poster remained tacked to my bedroom wall well into my teenage years. 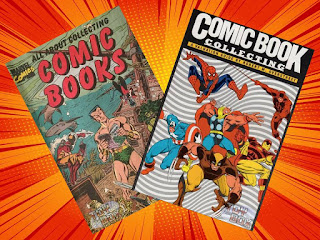 Lastly, the set included two unique "books", as well as, twenty-five comic book bags for protecting not only what you got in the box, but what you expanded on after that.

The aforementioned "books" were unique to the kit. The first was "All About Collecting Comic Books", was an eight page guide for beginners on comic book collecting. It was written by Steve Saffel and featured fantastic art taken from already published comics. The most notable artists were Todd McFarlane and John Byrne.

"Comic Book Collecting: A Valuation Guide By Robert M. Overstreet" was an introductory guide to grading and valuing your comics. See, the whole premise to the kit was to push how comic books were rising in value over the years. This "book" essentially served as a condensed price guide and introduction to how they worked.

As my collection grew from there, I found myself tracing the various images from the various comics I obtained. Because I didn't have true tracing paper, I would lay in my bed trying my best to see though the blank lined sheet in front of me as I mimicked the lines underneath with a pencil. 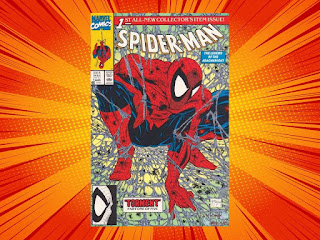 On one particular night in early 1991, I found myself in this same scenario. As I lay there attempting to trace out Spider-Man from the cover of 1990's Spider-Man number one, I found myself taking a different path. I said to my young self, "You know what? If you want to draw it, then draw it."

I removed the paper from the top of the book, found a hard surface to press on, and while looking back and forth from the book to the paper, I drew my very first Spider-Man, all on my own. Through more mature eyes, it wasn't very good, but back then, it was amazing. I drew this. I didn't trace it. It went from my eyes to my mind to my hand, and I did that all on my own.

It set into motion a new path before me. I was going to be a comic book artist. That was what I would devote my life to. From there, I drew, drew and drew. Countless sketchbooks I went through, all of which I stored in a giant Rubbermaid tote.

Sadly, as life often does, things changed, and my life went in a different direction. I still doodle here and there, but not to the lengths I did as a kid.

While I wish I could say I have all my sketchbooks to look through and revel in memories, unfortunately, this isn't the case either. My mom's cat, who we'll call Captain Jerk Face, crawled in the open bin one day and decided to use it as his litter box. While I tried to salvage things, and kept them for a while after that, the smell eventually got to be too much and it all went to the curb for the trash man.

Out of everything I had as a kid, that's the one thing I miss the most from my childhood. Unlike an action figure or playset, which I could buy on a whim, that stuff is gone forever. A piece of me that will be forever lost. 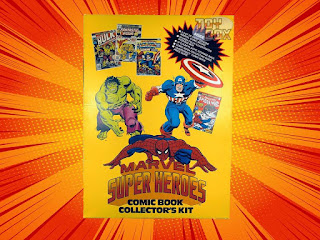 Because I don't want to end this on a downer, I'll instead opt to conclude on a completest archival purposes note.

In addition to the 1989 set above, Collector's Marketing Corp. also released a kit in 1990. However, this one was much smaller.

It contained only five comic books, ten comic book bags, as well as, a similar in style, but much smaller green cardboard comic box. Lastly, it also included the same "All About Collecting Comic Books," and an updated, 1990 Overstreet Price Guide.

It's a little more common than the 1989 version, but still seems to garner a seemingly high price for what it is. For me, the 1989 version I picked up was 100% driven by the sentimental value. Well worth the price, as far as I'm concerned.