M'boy, I loved me some stickers when I was a kid. Puffy stickers, character stickers, stickers in trading card sets, but most of all, scratch 'n sniff stickers. We collected packs of these in droves between me and my siblings, and we loved to trade them back and forth.

Out of the three of us, my sister was the more organized collector. She had all of her stickers neatly kept in puffy plastic cover sticker albums. If I recall, she had about two or three of them filled to the brim with all sorts of different, but awesome, stickers. My brother and I, well, we often ended up giving them to my sister, losing them, or sticking them to the various notebooks we carried to and from school, which meant for the most part, they went missing in the long run.

Though I'd often times toyed with the idea of tracking down the scratch 'n sniff stickers of my youth, I honestly never bothered at the time. Mainly because I had no clue where to start. I had no knowledge on the brand. No idea of how many they made. Nothing.

Then a few years back something great happened. A fellow blogger posted a great article on Stinky Stickers from Trend Enterprises, Inc. The article boasted to be a complete list, and sticker sample, of all 104 of the various one and a quarter inch stickers produced and released in the 1980's. As I scrolled through the images, the memories quickly came flooding back. The sights, the smells, the fun.

With list in hand, I ran for ebay to see just what I could find. Boy was I stunned when I found that not only were these stickers very readily available in pristine, unused condition, but that they were relatively cheap. The majority of them cost less than two dollars a piece. Sure, okay, that's a lot of money to pay for one sticker. However, it's justifiable when you're on the nostalgic hunt. I swooped these things up in droves, rarely having any difficulty finding the ones I wanted. While there were a handful of them that hovered above the $5.00 range, there weren't enough to make me throw in the towel. 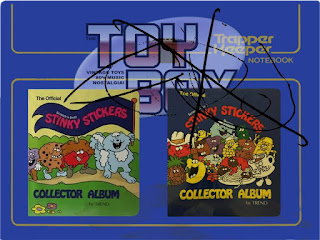 Even the official sticker album was relatively easy to find. However, these ranged all over the place in price depending on which version you grabbed. Let me put it this way - As cheap as $15.00, or as expensive as $200.00! Whew, that's an incredible range in price. Needless to say, I passed on the official album.

There are two separate albums that I found, a yellow cover and a blue one. Both are dated 1983.

When you open the book, you'll find an instruction page, of all things, which tells you not only how to affix your stickers, but also about additional pages which can be purchased separately, as well as protector page covers which can be zipped closed. On the other side of this paper is a checklist, of sorts, for some of the various stickers, perhaps all of the ones available by 1983.

The page after this can be used for stickers, but also features an area where the owner can put their name, address and phone number - a safety hazard no parent in their right mind would permit these days. This is followed by a handful of additional pages to adhere your stickers to.

Last but not least, there is an exclusive sticker inside the binder. This one! 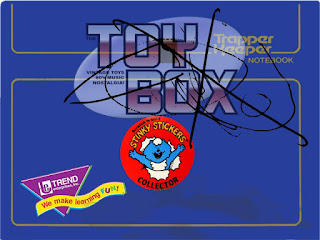 This sticker, however, was not a stinky one. Rather, just a regular old round sticker with their logo and mascot.

Which leads us into the heart of this article, the stickers.

As mentioned above, there were 104 stickers released in the 80's. I kept them in the same order as the aforementioned blogger I utilized for a checklist. The reason being, some of the stickers over time seem to have stopped giving off a strong scent, so identifying them was a little tough. With the aid of their list, I was at least able to know what they should have smelled like. 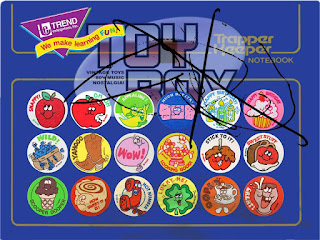 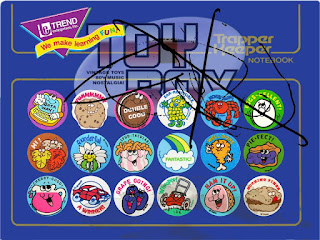 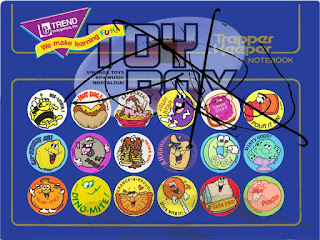 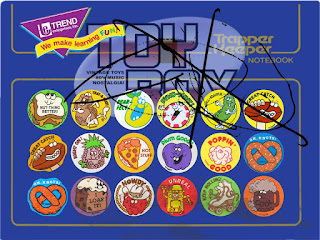 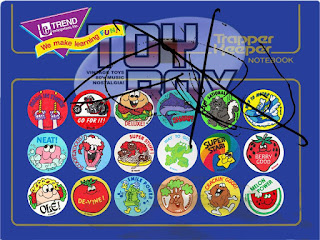 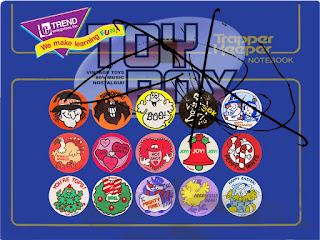 Though it came with a somewhat instant gratification, collecting these stickers now was just as much fun as collecting them back in the day. However, in my adult years, I know they'll be treated with the nostalgic respect they deserve, and not just utilized as Trapper Keeper fodder.

Click "HERE" to go back to the home page. For more posts related to this one, please click the labels below.
Posted by The Toy Box on March 08, 2021
Email ThisBlogThis!Share to TwitterShare to FacebookShare to Pinterest
Labels: 1980's, Scratch 'n Sniff Stickers, Stinky Stickers, Trend Enterprises Inc