Ah, yes. Back when Alice Cooper was a band, and not a persona of an individual. The group debuted in 1969 with their album, Pretties For You, and within it you can definitely hear the psychedelic influences that shaped it. What you can't hear is a band that plays in tune, or a singer that seems to be able to hold a note. If this is by choice, it's a poor one.

The album is laughable at best. If you told me in 1969 that the lead singer of this group would go on to be one of the most successful shock rockers of all time, I'd have told you to take another hit off whatever you were smoking. Pretties For You is garbage! Mind you, I came to this conclusion before track two was even over, and nothing beyond that did anything to change my mind. 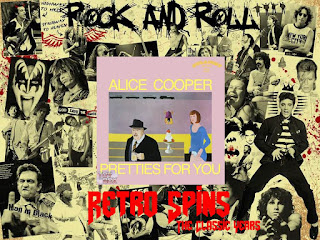 It's interesting how songs running less than a minute thirty seconds can still feel too long when they're so horrible. They end abruptly too, as if the band didn't even bother to finish writing them.

To be fair, my introduction to Alice Cooper didn't come until 1989's Trash, and album that Cooper purposely pushed for mainstream success. It's because of this, and his subsequent released, Hey Stoopid, that I had a greater expectation for what I was about to hear. I wanted to hear the foundation for what would become the 80's icon I came to know. Well, I heard it. I didn't like it. But, I heard it. Part of it anyway. I finally had to shut it off about halfway through. I couldn't take it much longer.

I'm really worried now, because I recently invested quite a bit of money into a plethora of Alice Cooper albums from the 70's and 80's. I really hope they don't sound like this nonsense. Otherwise, there's a trash can in my kitchen that's going to eat them up. This album was terrible! TERRIBLE! Get this thing away from me!

At least I'm not alone. Apparently even Alice Cooper knows the album stinks. Even he hasn't performed any songs from it since the band's 1971 breakthrough album, Love It To Death. I suppose in light of this, I don't feel so bad shutting it off. If the person behind it even moved away from it, I have no guilt in doing the same.