This weekend brought with it Coming To America 2 on Amazon Prime, and unlike Bill And Ted Face The Music, this is how sequels twenty years after the fact are done wrong.

While there are appearances from all the characters you know and love from the original film, for the most part, and all new cameos, what this movie lacks is the heart of a true sequel. What made Bill And Ted Face The Music such a great film was that it brought back characters we loved, and advanced their story. 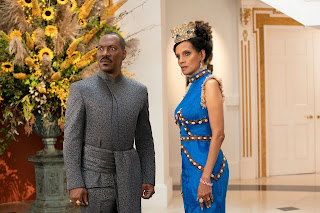 Instead of doing this, Coming To America 2 introduces us to a new main character, one I ultimately didn't care about, and pushes all of the characters from the original film to the background. This includes Eddie Murphy and Arsenio Hall, with the latter having so little screen time he may as well not have even been in the movie. Noticeable omissions in the returning cast are Lisa's sister, Patrice, and her ex-boyfriend, Darryl.

Perhaps the biggest disappointment was that we don't even get a cameo from Samuel L. Jackson. It would have been great to see him robbing the McDowell of Zamunda, or better yet, reformed and the new manager. Missed opportunity. Then again, considering this whole movie was a big missed opportunity, this is no surprise.

The story's premise revolves around Prince, or excuse me, King Akeem discovering he has an illegitimate son back in America. Because his country simply can't crown one of his three daughters as the next ruler of Zamunda, its only natural that he must return to New York to retrieve his son, a task which takes no more than ten minutes.

The majority of the film takes place in Zamunda, where son Lavelle must train and show that he can be the next ruler of their country. Compatibility issues between the over the top New York characters clash with those of the sophisticated Zamunda folks, and while this causes the main strife in the film, at the one hour fifteen minute mark everything makes a completely unexpected one-eighty when suddenly everyone forgives each other, becoming the best of friends (or "family" as they state). It made no sense and derails an already paper thin film. 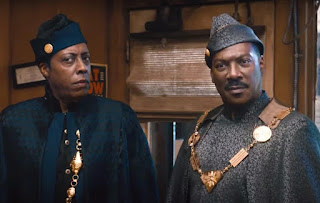 Anyway, we return to New York for a brief moment of the film, but at this point, it's too late. I'd already been subjected to over an hour of a main character I didn't care about, didn't want to see, and an overall sense of disappointment from a lost opportunity to follow up to one of the greatest comedies of the 80's.

The film warps up in a neat bow, virtue signaling to the fact that women can be the rulers of a country, with Lavelle going on to live his own life with his Zamunda bride of his choosing.

Overall, the movie is passable, but fails as the sequel it could have and should have been. If you had hoped to see any form of extension to the story of Akeem and Semi, you won't find that here. Oh well, at least we got to see the man from the "what's going down" episode of That's My Momma one more time. Jackson Height's own, Mr. Randy Watson!

If I were to be given the opportunity to re-write the film, I definitely would have taken it in a different direction. The film could have still had the same premise, whereas Akeem finds out he has a son. However, rather than tread old ground, a story about a man of royalty looking to find his own bride, I would have focused on a son showing his father how the world has changed. The film makes it a point to tell you that Akeem promised to change Zamunda, but yet continues to live tied to the old ways. So use that opportunity for a son growing up in poverty and no opportunities to teach a father that people should be given a chance to blossom and achieve any goal they set for themselves. Even a daughter who wants to be Queen of a country. Then bring it back full circle to him realizing his daughter can be the heir to Zamunda. This type of story could have taken us on a journey of characters we loved, while also introducing us to new faces. More importantly, showing us that there was still a story to be told about these characters - You know, the whole point of a sequel. But hey, what do I know, right?

Posted by The Toy Box on March 06, 2021
Email ThisBlogThis!Share to TwitterShare to FacebookShare to Pinterest