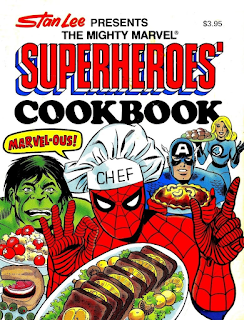 One of the things I picked up around my birthday was The Mighty Marvel Superheros' Cookbook. The plan was to take the book, and over the course of however long it took, make everything from page one to whatever the last page was.

Size wise, the book was much thinner than I expected. I'm used to tome size cookbooks that are hundreds of pages. However, this one came in shy of just a hundred. Mind you, many of those pages are taken up with glossaries, splash pages of artwork, cooking tips, and what I'll call throw away pages (copyright, blank, etc.).

The artwork inside was really cool. On par with the great comics of the era. It was this that was really driving my interest in which each hero got assigned to which recipe. I was getting rather excited.

Then a problem set in.

As I thumbed through the book, I found myself frowning at the ingredients for the dishes. Most of these recipes were made by simply opening cans and condiments and mixing them together. Many of which include the use of Cream of Mushroom Soup. That stuff is so nasty.

Not only that, but in general, the recipes sounded disgusting. Here's a particular nasty one that made me want to barf:

Deviled Dip (as in Dare Devil)

GAG! Did people really eat this stuff in 1977? The book is filled with this kind of garbage.

Between that and the overall simplification of other recipes, such as open various cans of fruit and throw it in a bowl - bam - fruit cocktail, I have zero interest in making any of these recipes. It would simply be a waste of food.

I expected so much more from this book. While I didn't necessarily know what I was going to get, I certainly hoped for something edible. These recipes definitely don't qualify for that. I'm so disappointed.

To make matters worse, this book wasn't what I would call cheap. Getting one (used), will cost you forty to sixty dollars. Mind you, for about half that price, you could get a two to three hundred page cookbook, with far greater recipes.

Well, since this is a cookbook, let's figure out a way to take this lemon and make lemonade. Rather than chalk it up as a loss, I'm instead going to still go through this book and make all the dishes inside. However, instead of following these nasty recipes, I'm going to reinvent them for a more refined pallet. Don't get me wrong, these won't by any means be five star dining recipes, but they'll certainly be better than these, which I would equate to digging through a garbage can. So stay tuned. We're going to be cooking soon.

Click "HERE" to go back to the home page. For more posts related to this one, please click the labels below.
Posted by The Toy Box on August 31, 2020
Email ThisBlogThis!Share to TwitterShare to FacebookShare to Pinterest
Labels: The Mighty Marvel Superhero's Cook