9 1/2 Weeks wasn't exactly the kind of movies my parents let me watch in 1986. Nor would it probably have interested me anyway. As such, I don't think I missed out back in the day. I did try watching it in my teenage years, but much like what I thought from my youth, it didn't interest me anyway. 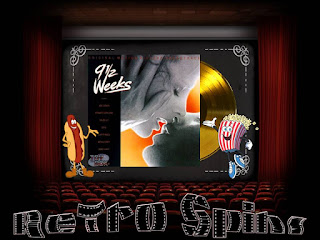 Micky Rourke (Pope of Greenwich Village) and Kim Basinger (Fool For Love) take you on an eroitic odyssey to the limits of sexual obsession in this steamy story of a love affair that breaks every sexual taboo. Director Adrian Lyne (Flashdance) creates "the most sexualized relationship in years" (Vanity Fair" in a lushly photographed rendition of secret fantasies and desires that come vividly to life on screen.

Set against the high-tech backdrop of Manhattan, 9 1/2 Weeks is the length of the affair between Elizabeth, a beautiful art dealer, and John, the man who becomes her lover and changes irrevocably the course of her life. After tantalizing initial encounter, John charts the course of their sensual journey together in a deadly serious game of sexual dominance, unlocking the door to hidden dreams, pain and ecstasy.

The highly-charged scenes evoke "responses toward sex in cinema that haven't been touched on for years" (Village Voice), underscored by a pulsing soundtrack featuring Grace Jones, the Eurythmics, Joe Cocker, Bryan Ferry and many others. 9 1/2 Weeks is a passionate and provocative look at love and obsession that is moving, thrilling, and sometimes shocking. - Back of the original VHS

Um...yeah...My parents definitely weren't letting me watch movies like that in 1986.

Sexy time movies aside, the soundtrack did pique my interest when I saw it in a dollar bin in Timonium (back in December 2017). With the likes of John Taylor, Corey Hart, Devo and Eurythmics all contributing, surely there was at least something a fan of 80's music could find to enjoy.

Well...I didn't necessarily hear anything I hated. Unfortunately, I also didn't hear anything that got added to any of my shuffle lists. The soundtrack was just...there. Neither good nor bad. Neither annoying nor interesting. Forty-one minutes of not having to sit in silence.

If I had to pick one stand out track, I suppose that would be Luba's Let It Go. I don't know if it was because it was the last song on the album, and I actually put some effort into trying to enjoy it, or if it was actually good. I suppose I'll listen to the song again in the near future, and see if it is a true winner, or just a fluke.

Click "HERE" to go back to the home page. For more posts related to this one, please click the labels below.
Posted by The Toy Box on August 11, 2020
Email ThisBlogThis!Share to TwitterShare to FacebookShare to Pinterest
Labels: 1986, 80's Album Review, 80's Music, 80's Music Review, 9 1/2 Weeks, Music of the 80's, Retro Spins