Boy, talk about a niche audience. Part President personas, part horror icons. It's an interesting concept, but not one destined for success in your average toy isle.

Each eight inch figure came packed on a unique cardback and featured a decent amount of articulation - On par with your traditional Mego figure of yesterday. They're not bad figures if you're judging them on style, articulation and overall quality. They're just obscure. Odd if you will. 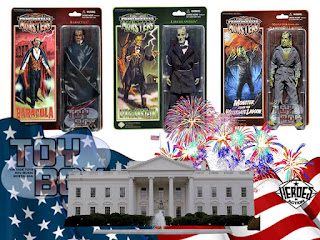 I can honestly say that neither aspect of collecting figures based on US Presidents or monsters is appealing to me, so this is definitely a line I personally would pass on. However, I suppose there's someone out there who would take a strong interest in these. Like I said above, they're not bad quality figures. 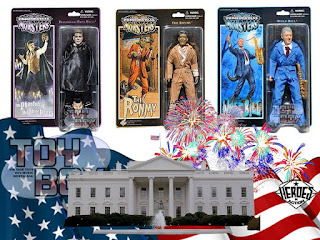 In total, there were only seven figures produced for the line. This isn't too terrible in terms of volume if you were looking to add these to your collection. Price, on the other hand, is another story. 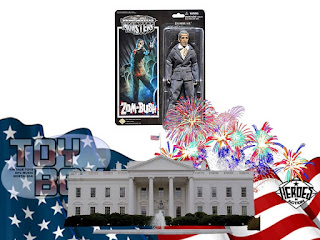 In the long run, obscurity has somewhat paid off for this line. Though sales aren't often, figures have been known to sell for fifty to one hundred dollars each, mint in the package. However, in most cases, they typically go for between twelve and thirty, which is not a bad kickback for a relatively ignored line.

Heroes In Action produced a small sub-series to the line the same year the eight inch figures were released. These smaller, four inch statuettes, kept the same motif of incorporating a monster theme into Presidential personas. All of which were re-imaginings of the larger figures above. 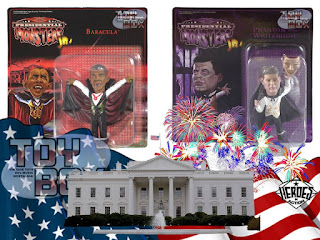 There were three individually carded figurines produced, and much like the larger figures, were released on their own individual cardbacks. 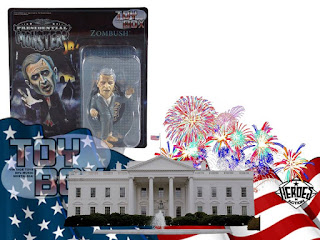 Before tapping out of the game, two San Diego Comic Con exclusives hit the convention scene. These too fell under the "Jr." banner. However, the only versions released were those of Barrack Obama. Each one came packaged together with an alien from Mars Attacks - An equally odd combination. 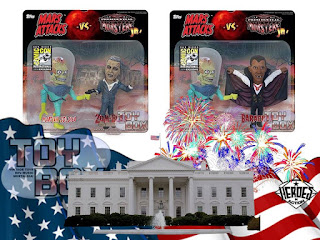 Heroes In Action didn't get the traction it needed in toy isles to break out into the industry. As a result, they closed their doors around 2015 / 2016. The Presidential Heroes / Jr.'s series was only the second of three toy lines they released, and I use the term "lines" liberally. The first being their 2009 Barrack Obama one-shot figure and their last being the 2015 Mars Attacks Jr. Martian Soldier one-shot, the latter being nothing short of a repack of the above noted version. Hardly a "line" when only one figure was produced / released for each.

Like I said above, these figures weren't bad. They were just really obscure. As such, they really were targeting a specific niche audience, which perhaps, didn't exist at the time. With prices as potentially high as they can be on secondary markets, maybe they'll finally get the opportunity they needed to become a hot collectible. Cult success can sometimes be bigger than major success in the long run.

Click "HERE" to go back to the home page. For more posts related to this one, please click the labels below.
Posted by The Toy Box on August 24, 2020
Email ThisBlogThis!Share to TwitterShare to FacebookShare to Pinterest
Labels: 2010's, Heroes In Action, Presidential Monsters, Presidential Monsters Jr.