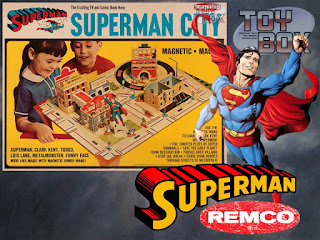 Remco's Magnetic Superman City, much like the Gotham City playset, featured a magnetic Metropolis "map" which you could place cardboard buildings, such as the Hotel Metropolis and Daily Planet. To interact with it, the set included cardboard figures. These were, Clark Kent, Superman, Lois Lane, a robot, Strongman and a few cars. Once again, a plastic wand was included to move all the pieces around on their magnetic stands.

Admittedly, it's not as exciting as the Batman set, which seemed to include way more pieces than this particular one. Still, if you were a fan of Superman at this time, it's a pretty neat set.

Not too many of these have been seen out in the wild, so unfortunately, chances are rather slim that you'll come across one. Like the aforementioned Gotham City set, these are Holy Grails for Superman and DC Comic collectors.

Click "HERE" to go back to the home page. For more posts related to this one, please click the labels below.
Posted by The Toy Box on August 17, 2020
Email ThisBlogThis!Share to TwitterShare to FacebookShare to Pinterest
Labels: 1960's, Magic, Magic Magnetic, Magic Magnetic Gotham City, Magnetic, Remco, Superman City