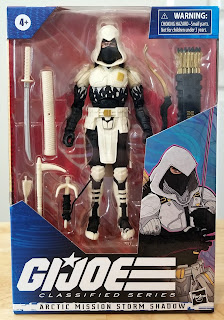 He's not the Storm Shadow people wanted, but a Storm Shadow nonetheless. Arctic Mission Storm Shadow was quietly and quickly released via Amazon as an exclusive to their site, and sold out rapidly to bots and the very few collector's who got one. Your chances of getting one now are pretty much limited to second hand dealers or someone generous to put one in your hands at cost or as a gift. I've amazingly seen all three of those kinds of people.

Despite being an exclusive, Hasbro has kept the packaging within the realm of the other basic assortment (and exclusive) figures. They've even continued the numbering scheme, denoting this particular one as number fourteen. That puts him just after the Target exclusive Baroness, and right before Profit Director Destro.

What I don't like about the package is how cartoony Storm Shadow looks on the front (and side). I would have much preferred a more realistic look to him, much like that of most of the other packages. I know he's not technically the first to have a box drawn in this style, but it's definitely one of my least favorites.

As I said above, the rest of the box is consistent with the current design for the line. Once again there are the symbols on the side of it, which again can be looked at in detail at the G.I. Joe Classified site, HERE. On a side note, it doesn't look like anything new has been added to their site.

Beyond that, there's not much more to say about the packaging. Well, not that I haven't already talked about in prior figure reviews. 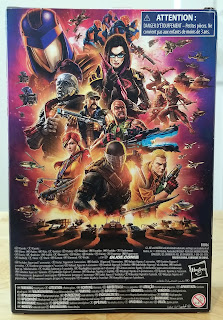 Popping the figure out, I immediately noticed something was off about it. When looking at the figure from the front, nothing really stood out as problematic.

There's a great amount of detail in the Arctic Mission Storm Shadow. The white, black and gold really work well with each other to make details pop. The hood is also removable, but I opted to just leave it in place. Design wise, he looks pretty cool. 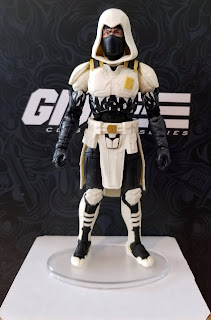 Then I turned the figure to its side and saw what was tingling my spidey-sense.

What is up with that leaning syndrome? I turned the figure back around and adjusted him, only to have him slouch back over. The problem appeared to be the torso cut. It was too loose. It's not only a very unfortunate defect on mine, but one I've heard other reviewers talking about. So apparently, this is going to be a common flaw with the figure. 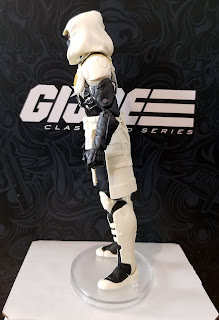 It's like that scene from Michael Jackson's Smooth Criminal

It appears the majority of the detail on this figure was reserved for the front side. That's a bit disappointing. Especially considering the minimal detail on the back will get covered up by the accessories. In that regard, those points seem almost wasted. 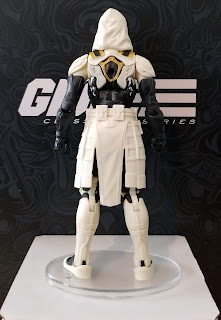 The opposite side of the figure offers nothing more than the prior. 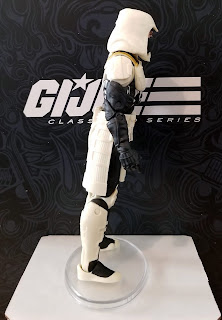 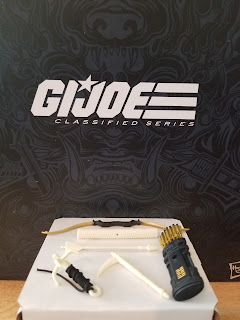 Arctic Mission Storm Shadow comes with a fair amount of accessories. In the box, you'll find a sword and sheath, bow, quiver, individual arrow, hook with rope and scythe. That's a ton of great stuff!

But here in lies another problem I have with the figure. While the other characters in the line also have included a ton of accessories, there's been a place on them to put them. Not so much with this one.  You're ultimately going to have to pick and choose which accessories you want in the figure's hands, and then the rest are going to have to be stored at his feet or in a box.

The bow and arrow, while cool in paint schemes have their own set of flaw. For starters, the bow has no string. Not even a molded one in plastic. Meanwhile, the quiver and arrows, while they look cool, are essentially a solid piece of plastic, making them more so just decoration. As for the individual arrow, it's not only not in line with the color of the arrows in the quiver, but it's also longer. At the end of the day, it feels like someone wanted to care, but ultimately couldn't invest either the time or resources to do so to the full extent.

I do like the sword. I was glad to see it not only got Storm Shadow's customary white grip, but a silver painted blade. Though it doesn't make sense as to why it would connect to the back of the quiver, it looks pretty cool.

Speaking of the quiver (again), it's also very flimsy in his back, falling out easy at the lightest touch. This whole loose backpacks and back peg accessories is becoming a consistent problem with the line. I don't know what the deal is, but the majority of the accessories simply don't want to stay attached to the figure's backs.

Overall, Arctic Mission Storm Shadow makes a nice addition to the G.I. Joe Classified line, but I think more people would have appreciated a classic look sculpt over this homage to the late 90's. In hind site, it's interesting that they denoted the character as part of Cobra, because for the look he's based on, at this point, he was part of the Joe team. 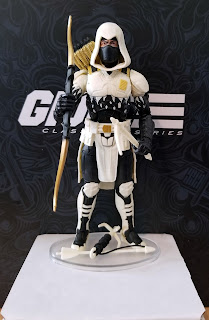 It has disappointing flaws, and if it weren't for Roadblock V2, Arctic Mission Storm Shadow may very well have ended up being my least favorite in the line to date. But I don't hate this figure by any means.

Click "HERE" to go back to the home page. For more posts related to this one, please click the labels below.
Posted by The Toy Box on August 25, 2020
Email ThisBlogThis!Share to TwitterShare to FacebookShare to Pinterest
Labels: 2020's, Classified, G.I. Joe, G.I. Joe Classified, Hasbro