Maybe seven is too many, but Police Academy remains my all time comedy series of films. Part four just so happens to be my absolute favorite out of all of them, and coincidentally, the only one to have a soundtrack released at the time of its debut. It wouldn't be until 2013 that one would be released for the first film. However, that's still five soundtracks unaccounted for. 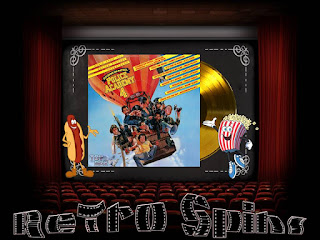 Hail, hail the gang's all here! The laugh-riot regulars of the nation's #1 film comedy series straps on nightsticks and slapstick for Police Academy 4: Citizens on Patrol, the funny film that gives the blue buffoons 4 hits ina  row, 4 years straight...4 everyone!

Police Academy 4's manic misadventure finds fuddy-duddy Lassard deciding to toughen up neighborhood watch groups by training them to be Cizitens on Patrol, or COP. And guess who the instructors are? That's right, the same Academy grads who thought the F's on their own report cards meant "Fantastic."

When rival officer Lt. Harris (G.W. Bailey) sees the blue leading the beleaguered, he decides the time is ripe to discredit the Academy. But leave it to our hapless heroes to use their collective 20-20 IQ and save the day, taking to the skies in biplanes and hot-air balloons for a grand, fantastic finale.

You haven't seen it all - until you've seen Police Academy 4: Citizens on Patrol. There's always something new going on and something funny coming down in this loony battle of wits...and half-wits! - Back of the original VHS

With that said, no, this isn't the best 80's music to be found on a soundtrack. Enjoyable? Yes. Top ten worthy? No. Not even close. I dare say if it wasn't a film I was so familiar with, I may not even have liked it.

Noticeably omitted from the album is It Doesn't Have To Be This Way from The Blow Monkeys. This is the song which plays during the scene where Zed and Laura fall in love. I suppose if you wanted to dig deep, there's also a lot of the score missing from the soundtrack - Such as the classic opening theme. Only one track from the Robert Folk's score makes an appearance - The High Flyer - which is a medley.

Overall, I like this album a lot. However, this is not because of the strength of the songs, but rather, the nostalgia and imagery it invokes in my mind. I ended up adding only a couple songs to my iPod and iTunes shuffles for the future, Darryl Duncan's Rock the House and Michael Winslow with The L.A. Dream Team's Citizens On Patrol, because honest, these were the only two tracks I saw myself actively wanting to listen to again.

For those of you on the hunt for this one, it's worth noting it was never released on CD. As such, it's only available on vinyl or cassette. The cassette version is far more difficult to come by than the record.

Click "HERE" to go back to the home page. For more posts related to this one, please click the labels below.
Posted by The Toy Box on August 25, 2020
Email ThisBlogThis!Share to TwitterShare to FacebookShare to Pinterest
Labels: 1987, 80's Album Review, 80's Music, 80's Music Review, Citizens On Patrol, Music of the 80's, Police Academy, Police Academy 4, Retro Spins