I got introduced to Lou Diamond Phillips in his role as Chavez in the two Young Guns films - A guilty pleasure of mine to watch back to back every year. I always felt like he wasn't really utilized to his fullest potential in films, but have to say his portrayal of Ritchie Valens was superb. 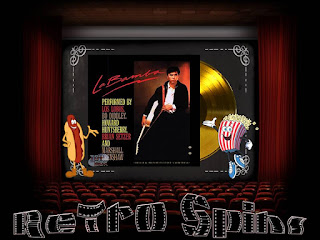 The Man, the Myth and the Music that brought America to its feet and catapulted 17 year-old Ritchie Valens to rock 'n' roll stardom lives again in "LA BAMBA." A Mexican-American farm laborer obsessed with music and full of reams, Ritchie (Lou Diamond Phillips) bursts into the glittering world of 1950's rock with a string of chart-busting singles. Clinging to the love of his girlfriend Donna (Danielle von Zerneck) and haunted by a growing conflict with his half-brother Bob (Esai Morales) and eerie premonitions of his own death, Valen's meteoric rise to the top is suddenly halted by a final, shattering tragedy. A vivid portrait of Valen's vibrant life, "LA BAMBA" is alive with the electricity of his hits, "Come On Let's Go," "La Bamba" and "Donna," performed by Los Lobos, as well as the legendary sounds of Buddy Holly, Little Richard and Chuck Berry. - Back of the original VHS

Okay, so this may be cheating. It's not exactly chalk full of 80's material. However, unlike Dirty Dancing, which I dinged for this, these versions are at least re-recordings in the 80's.

Los Lobos does a fantastic job bringing the music of Ritchie Valens to a new audience, while also providing them with the break out they needed in the USA. Unfortunately, this album would eclipse their own 1987 entry, By the Light of the Moon - An album I'll be reviewing in 2021 as a Retro Spin.

It was easy for me to get into this album because I'm a fan of jukebox style 50's hits, and there are plenty offered here. Los Lobos contributes eight of the twelve tracks. However, I have to admit, beyond Brian Setzer, I didn't recognize any of the other contributors by name. Still, their songs didn't offend.

While you can't go wrong with La Bamba, the song, the stand out track for me actually wasn't a Los Lobos track. Instead it was Crying, Waiting, Hoping by Marshall Crenshaw (originally Buddy Holly). I enjoyed it so much that I actually played it again when I finished listening to the entire soundtrack.

Overall, it was a nice change of pace from the typical sounds of the 80's, and also nice to finally dig out a good album after the recent flops I had been subjecting myself to.

Click "HERE" to go back to the home page. For more posts related to this one, please click the labels below.
Posted by The Toy Box on August 04, 2020
Email ThisBlogThis!Share to TwitterShare to FacebookShare to Pinterest
Labels: 1987, 80's Album Review, 80's Music, 80's Music Review, La Bamba, Music of the 80's, Retro Spins