Birthday Wishes From Friends And Family

The birthday celebrating started early this year. It began on Friday the 14th with breakfast. A couple of my co-workers joined me at Cracker Barrel, which one of them was kind and paid for. It was there that I also got gifted with a bag of cotton candy popcorn and a fantastic limited edition picture LP of Prince and the Revolution's Purple Rain.

I think I can say with 100% certainty that this is my favorite album of all time. I'm torn between my desire to fire this up and keep it in pristine, unplayed condition. Ultimately, I'll probably end up giving it a spin. Why not? It's a record after all, not a decoration.

Overall, it was a very nice outing with my co-workers, and a very unexpected surprise to get not only breakfast, but some very nice gifts.

That evening, I got a call from my sister who said she was sending me a text message in a minute or two. When it came through, it was a gift card for Amazon. I'm not too sure what I'll use this for just yet. Truth be told, I don't even have an Amazon account.

Now my birthday isn't actually until today, August 16th, so we'll call the above a nice early kick off. 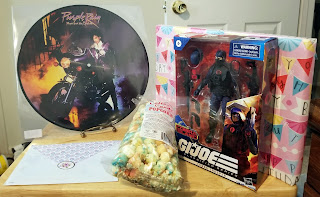 On my birthday, I got a card from my mother, which had her annual well wishing check inside. It's always ample enough to find and buy something nice with. Of course, if it wasn't burning a hole in my pocket, it could also just sit in my bank account.

I also got a Cobra Trooper from the Target exclusive wave. This was not found in stores, so I know the person who got it for me ended up paying a considerable premium for it. Very generous as it was, but all the more so considering the avenue it was obtained.

Last up was a pink package from my brother. It was actually the only gift I received that was wrapped. Sure, it's fun to open gifts, but I can also appreciate most people not wanting to spend money on paper and tape, just to be thrown away. Still, it was nice to physically unwrap something.

Inside were two mid-grade The Amazing Spider-Man comics, issues twenty-six and twenty-seven. These are actually two of my favorite issues I've read so far in my Comics Corner posts. They're the story arc featuring the introduction and death of the character, Crime-Master.

These two books had been on my want list for a while, but not something I was rapidly making any progress on obtaining. I'm really glad to have these for my comic collection. I'll be posting the photos up on my Order Of Battle page soon.

Thank you all for sharing your generosity on my birthday. I appreciate all your time and the gifts.

As of this post, the day is just starting, so more things are to come. For those of you who know me, you're aware that I always get myself something for my birthday. That post is coming later today, probably closer to the evening, as I actually haven't opened any of it. Until then, I'm off to enjoy the day.

Click "HERE" to go back to the home page. For more posts related to this one, please click the labels below.
Posted by The Toy Box on August 16, 2020
Email ThisBlogThis!Share to TwitterShare to FacebookShare to Pinterest
Labels: Birthday