It baffles me why any company would pay for what I can only assume would be an expensive license, then proceed to develop, produce and (attempt to) sell a bunch of toys that most people are not going to buy. Such example is today's toys from Basic Fun. 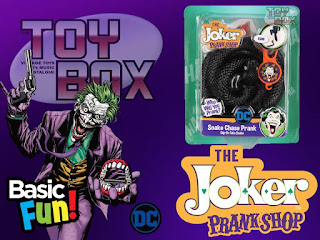 Basic Fun isn't what I would call a "bad" company. In fact, quite the opposite. They're relatively well known for their mini arcade cabinets, I'm talking hand held. My favorite being the awesome original Mortal Kombat. While difficult to play, with its six buttons and multiple joystick motions needed to pull off moves, it's still fun, aesthetically. Let's just say they display nicer than they actually play.

But today's post is not about video games. Instead, it's about another license which Basic Fun acquired in 2020. That being, The Joker. Now, in and of itself, The Joker is a brand that has a strong following, and typically, it sells. However, I have to take a step back when I see the offerings from this company and ask, "Why?" 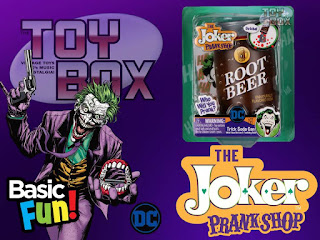 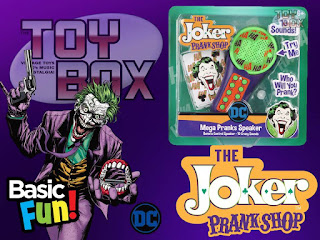 The Joker Prank Shop was initially released with five different items, all of them being dime novelties. I dare say the toys cost pennies on the dollar to produce, and it shows. Further, none of them correlate to The Joker in any form or fashion. I don't recall the character running around Gotham with trick soda cans and rubber snakes. 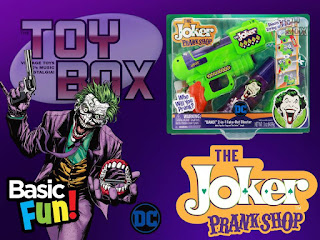 I don't know, maybe I just don't get it. Maybe I'm not looking at these with the child like spirit that's needed to truly enjoy theses. Sorry, but I just see them as cheap garbage, inflated in uniqueness by slapping The Joker's name on them in an ill fated attempt that the name alone will get more sales than the actual products would on their own.

During its initial release, the company offered five toys in total, all of which were available through Walmart. These included, (1) Snake Chase Prank (2) Trick Soda Can (3) Mega Pranks Speaker (4) Bang! 2-In-1 Fake-Out Blaster (5) Ultimate Prank Kit. Ugh, just typing the names out induced an eye rolling effect from me. Cheap, cheap, cheap, is what keeps screaming in my head as I continue to write this post. 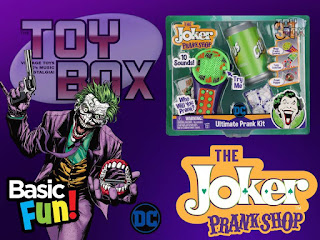 At the end of the day, I don't know why I'm so "offended" by these toys. It's not like I'm spending my money on them. I guess it's more so that Basic Fun would have the nerve to insult me so by even releasing these. Wow, I'm offended for the sake of being offended. So that's what it feels like to be a Millennial. I get it now.

These things tanked hard. While Wal-Mart is trying to get people to pay over ten dollars for them, you can actually find sellers on ebay listing them for less than half that price. I guess the joke was on the people who bought these.

Posted by The Toy Box on May 03, 2021
Email ThisBlogThis!Share to TwitterShare to FacebookShare to Pinterest
Labels: 2020's, Basic Fun, DC Comics, The Joker Prank Shop