The fun doesn't stop with G.I. Joe Classified, as today I unbox the all new Major Bludd from the Target exclusive sub-series, Cobra Island. 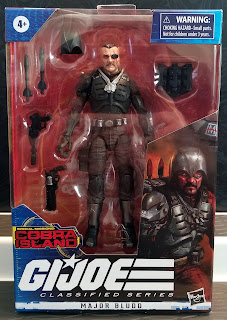 If you were to listen to the talk buzzing around the internet, you'd hear rumors that Major Bludd was to be part of Hasbro's G.I. June promotion, an upcoming event where it's anticipated that numerous new G.I. Joe based toys will be announced. However, if you were to check your local Target frequently, you may just luck into seeing the formally unannounced figure already on store shelves. In fact, of the previous waves, this particular figure seems to be in high abundance. Perhaps Hasbro and Target have finally sorted out their issues with supply and demand, and things will get a little easier from here to find the new figures. Then again, that may also just be wishful thinking on my part. 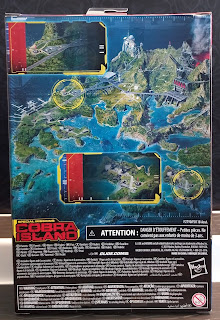 Flipping the package over, you'll see that all too familiar Cobra Island map, this time highlighting two different locations from those of the first and second waves of figures. As I look at the map, I have to scratch my head and wonder why they're bothering with this type of packaging. While it zooms in on portions of the map, what it doesn't do is bother to tell you what those locations are. It's kind of pointless.

Flipping the package over, we get that wonderful artwork on one side, and the other side continues to showcase the classified files symbols, which can be deciphered at the G.I. Joe homepage. Looking at these, it appears that Major Bludd is a level four mercenary, specializing in level two launchers as gear. He's ranked level three in tactics skill, and sabotage mastery.

I made it a point to poke around the website a bit more before coming back to this, and was kind of disappointed to see that nothing new has been added since the day the site launched. It makes me wonder if the pages have been abandoned.

Based on the side and top, Major Bludd is number twenty-seven in the series to date. That still leaves the gap figures sixteen through twenty, which I still speculate will end up being the five figures coming soon for the upcoming Snake Eyes movie. 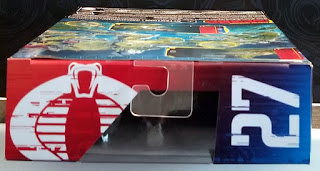 Last on the packaging is the usual legal jargon and UPC symbol located on the bottom of the box. Nothing really to see here. 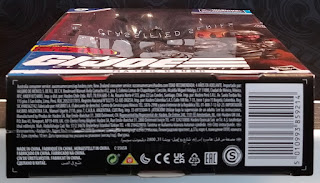 Popping the figure out and taking a look, I immediately gave a bit of a frown. Before I say why, let me first explain my method to how I break down figures. If 100% encompasses the entire figure, 10% would be the head, 30% the torso, 15% each per arm and 15% per leg. Add them all up, and you get your 100%.

With the method to my madness in mind, looking at Major Bludd, about 40% of this figure is new, with the rest of it coming from a retooled Cobra Trooper / Infantry figure. The only new items are the head, right arm, vest and shins / boots. I know that Hasbro was notorious for reusing parts during the vintage 3 3/4 line, it's a bit disappointing to see how heavily it's being used. 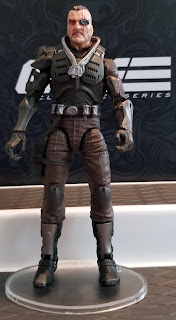 Despite the reuse of parts, Major Bludd isn't a bad looking figure. He's not my favorite to date from the line, but he's okay. The figure has just enough of an update, and just enough homage to the original to fit within the Classified line. It's worth noting that the dog tags around his neck are removable.

A lot of the detail gets lost in the black and brown paint, so you really have to take the time to rotate the figure around and take in everything. 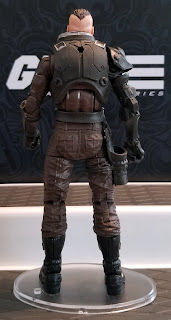 With the exception of the head sculpt, the majority of the detail was poured into the right robotic arm. However, the overall articulation is limited as a result of the shoulder piece design, so if that's a major detractor for you, this figure may end up disappointing you. Fortunately, all the other articulation is on point. 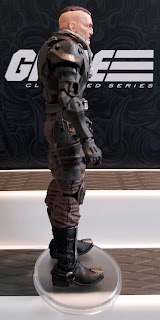 The figure comes with quite a few accessories, and crucial to any good figure, is the ability to store them all. The holster hip easily houses the revolver, while the backpack holds everything else, with exception of the helmet. However, the rockets fit rather loosely in the pack, and can easily fall out. 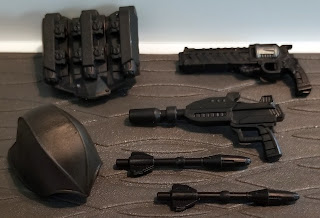 All decked out, Major Bludd looks okay, but again, it's not my favorite in the line. Still, the character is a staple to the Cobra team, and that makes him pretty much a must have for your collection. 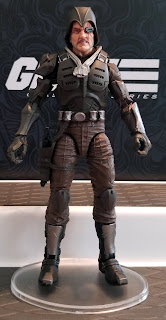 That about wraps it up for this post. However, before I head out, I put together a document with all of classified files symbols and descriptions from the site. Drop me a message in the comments if you want a copy. 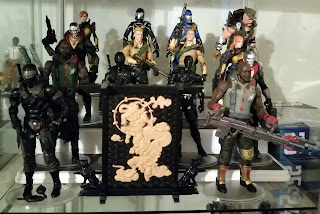 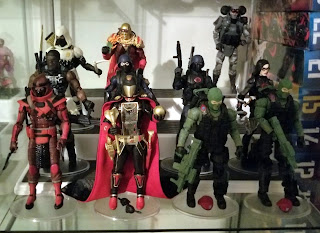 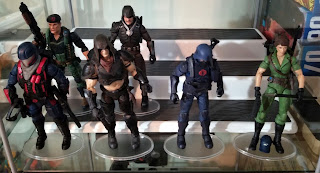