I'm an odd one when it comes to Aerosmith. For starters, I didn't start to really get into them until their 1987 album Permanent Vacation, and I much prefer their non-hits to the actual songs that get (over)played on the radio.

My introduction to Aerosmith was an unwanted one. My brother got into them big time when he was in his very young teen years. He was so into them that he had all their albums on cassette, then got them all on vinyl, and then on CD. He also got my dad to go see them live when they toured for their Get A Grip Album, which in turn made my dad somewhat of a fan. Countless days of my youth I was subjected to album after album, which I suppose in a way turned out to be okay because I would eventually start to like(ish) them. In fact, I inherited my brother's CD's when he got out of owning physical media, which makes owning their albums all the more special to me.

I suppose it's cheating in a way to write a post on an album I've heard numerous times, but on the other hand, it would have felt weird to get through an entire year of Retro Spins based on classic rock and to not have them somewhere in the roster. 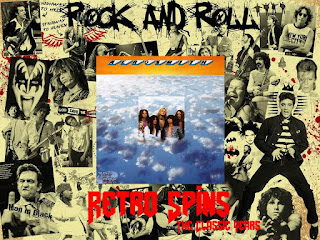 The band's 1973 debut has definitely invaded my ears on many occasions, and today is nothing more than yet another listen. More so to refresh myself on what exactly was on it. Though I did have to skip past Dream On. That song has been played to death between my brother and the radio. If I'm tired of hearing it, I can only imagine how tired the band is of having to play it. How boring it must be to have a catalog of hundreds of songs over decades to have to sing the same twenty over and over again, night after night.

What stands out within their debut album is how rhythm and blues oriented it is. Hearing this puts into perspective why they took such an approach with their 2004 Honkin' On Bobo. What people felt was a different direction for the band was actually a return to their roots, and I can appreciate that album more so for that aspect.

A song which doesn't get all that much acknowledgment, but is definitely one of the better on their debut album, is Walkin' The Dog. If you haven't heard it, I definitely recommend it. It not only captures the sound of the whole album within it, but the guitar work is amazing.

Their debut album will never be my favorite from Aerosmith, but for what it's worth, I like it. It's solid. Yes, the hits from it are very overplayed at this point in life, but it's still amazing to see that from their very first album the band knew how to craft songs that would last a lifetime and beyond.