As a kid, I was always confused by why two men were singing love duets which came off as them singing to each other. As I grew older and became acquainted with the life choices some make, I at least could grasp on the circumstances that would call for that. As an adult, I can at least listen to the track without thinking that, and don't think at this point that they were. Instead, I look at lead singers Russell Hitchcock and Mark McEntee as geniuses. They probably racked in so much pus.....um....love, with their sappy songs.

Since 1976, Air Supply have released seventeen studio albums, of which I own four: 1980's Lost In Love, 1981's The One That You Love, 1982's Now And Forever, and 1985's Air Supply, the latter not to be confused with today's debut album of the same title. My introduction to the band was throughout the 80's via the various tracks which got played frequently on the various radio stations. It's because of this I never really got plugged into anything from their 70's years, and since they relatively fell off the map in the 90's and beyond, despite releasing albums, I obviously never kept up with them. 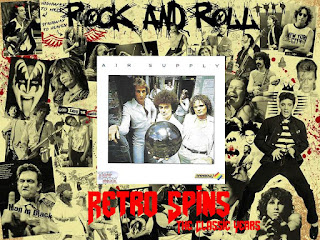 As I dig into the classic years of several artists and bands, I felt it appropriate to go all the way back to the beginning with this group and see just what exactly they had to offer. Firing up their 1976 self titled debut, I immediately felt a funk / disco groove to the opening track, Feel The Breeze. From there, things mellowed out a bit, falling in line with the typical ballad sound Air Supply is known for, but revisited the upbeat tempo with a few tracks here and there.

Reading through the track listing, I can honestly say that none of them jumped out at me as anything I had heard. Not even the lead single from the album, Love And Other Bruises.

Overall, their debut release wasn't for me. I just didn't particularly care for it. I'm perfectly content with the albums I have from the band, and don't see much point to really delve into them much deeper than I already have. Air Supply has their hits, but at the end of the day, they were never really a band for me. Considering between the two of them, Hitchcock and McEntee are worth almost twenty million dollars, I don't think they necessarily care at this point that an aging 80's kid won't be buying used albums they won't see any profit from anyway.

Disclaimer: They Toy Box does not endorse or contribute to piracy. Retro Spins posts are intended for educational and entertainment purposes only. None of the music discussed here is available for sale, downloading or distribution.
Posted by The Toy Box on May 19, 2021
Email ThisBlogThis!Share to TwitterShare to FacebookShare to Pinterest
Labels: 1976, 70's Album Review, 70's Music, 70's Music Review, Air Supply, Music of the 70's, Retro Spins